But for the next three weeks, I’ll be featuring winners from Figment.com‘s
“A Chance to Unremember” Writing Contest.

I’ll be featuring those winners right here on the blog along with giveaways of UNREMEMBERED!


The 3rd place winner of “A Chance to Unremember” hosted by Figment.com was submitted by 16-year-old Lilly Maison. She was recently recognized by the Scholastic Art and Writing awards for one of her short stories and received a gold medal! Lilly is currently working on a novel and various short stories, poems, and memoirs. She likes writing in different genres but has a special love for sci-fi, dystopia and fantasy.

And without further ado, here is Lilly’s awesome 3rd place entry, which I absolutely loved!

The truth is there was nothing really wrong with Kaden Carlbrooke. He wasn’t psychopathic, or malformed, or stupid – he just had the unfortunate luck to have been unanimously voted “uncool” by some kind of unofficial secret ballot. By April of freshman year, he was irreversibly branded a loser. The loser, really, because Kaden became the school’s punching bag.

I was sitting on the bus on the way home from school, my head leaning against the smudged window, when I looked over and saw Kaden sitting alone in his seat, his white shirt soaked with something yellow and reeking of ammonia. Behind him, Jared Wantek was guffawing with his friends, an empty plastic bottle in his hand.

I looked again at Kaden. His bottom lip was trembling and he was holding his shirt out away from his body. My eyebrows knit together, my fingers reaching towards my bag. I had an extra shirt in there, a t-shirt I had packed for gym. But if I gave it to him…I shuddered just thinking of what Jared would do to me.

So I did nothing. I sat there for the rest of the bus ride, got off at my stop, and forgot about it.

But Kaden didn’t. He hung himself in his bedroom closet that night.

It’s one of the few things in my life I would be happy to forget.

That story makes me shiver! Ahhh!! So good! 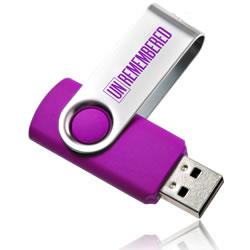 And to celebrate Lilly’s amazing contest entry, I’m giving away an autographed copy of UNREMEMBERED right here on the blog PLUS an Unremembered Memory Stick, which comes pre-loaded with tons of bonus content including a special sneak peek of book 2! (OPEN TO ALL COUNTRIES!)