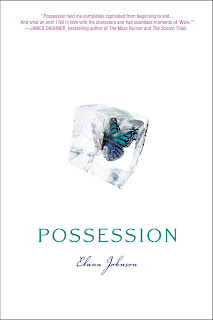 My Guest Star author this week is Elana Johnson, author of the brand new novel, Possession

Vi knows the Rule: Girls don’t walk with boys, and they never even think about kissing them. But no one makes Vi want to break the Rules more than Zenn…and since the Thinkers have chosen him as Vi’s future match, how much trouble can one kiss cause? The Thinkers may have brainwashed the rest of the population, but Vi is determined to think for herself.

But the Thinkers are unusually persuasive, and they’re set on convincing Vi to become one of them….starting by brainwashed Zenn. Vi can’t leave Zenn in the Thinkers’ hands, but she’s wary of joining the rebellion, especially since that means teaming up with Jag. Jag is egotistical, charismatic, and dangerous: everything Zenn’s not. Vi can’t quite trust Jag and can’t quite resist him, but she also can’t give up on Zenn.

This is a game of control or be controlled. And Vi has no choice but to play.

“Possession held me completely captivated from beginning to end. And what an end! I fell in love with the characters and had countless moments of ‘Wow.'”
–James Dashner, bestselling author of The Maze Runner and The Scorch Trials

“Who Should Read This: Anyone who wants a challenge: This plot is so twisty, I had to read the last chapter twice before I could believe what happened. There’s also a very nice balance between badass action and romantic tension for readers who like a good mix of the two.”
–MTV.com

“Most [readers] will be drawn in by the love triangle, revelations about Vi and her family, and a dark twist ending that maintains the faintest glimmer of hope.”
–Publisher’s Weekly

And here’s my interview with the author, Elana Johnson!

If you could have dinner with one of your characters who would it be?

Oh, I would definitely have dinner with Zenn Bower. He’s so mysterious in the book—and in my head. I still don’t quite have him figured out. So dinner with him would be fab!

I don’t really have a process for writing. So sometimes I begin my books with an email to myself. Or a scene in my head that just needs to be written down. I think a lot. I might write another scene. And another. After a while, I think, “Hmmm, this might be a book.”

The first thing I do when I finish a book is celebrate. Writing an entire novel is a lot of work! Then I let the MS cure for a little while before coming back for the first round (of many) massive rewrites.

The novel came first. I brainstormed a billion titles with the word “control” in it. I thought I had a good one. My publisher and I discussed it, and decided something a little less punny would be better. That’s how we came to POSSESSION.

If you could choose one dessert or snack food that you could eat as much as you want of (and never gain an ounce!) what would it be?

I’m working on resting before I have to do edits for the companion to POSSESSION, which is tentatively titled FUGITIVE and will be out with Simon & Schuster in June 2012.

To read the first two chapters, go to the official POSSESSION website.