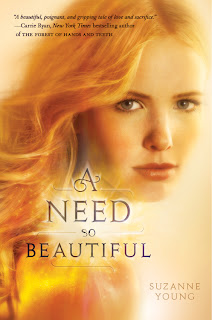 It’s time for another Guest Star! Our guest this week is Suzanne Young, author of the brand new novel, A Need So Beautiful

About A NEED SO BEAUTIFUL:

We all want to be remembered. Charlotte’s destiny is to be Forgotten…
Charlotte’s best friend thinks Charlotte might be psychic. Her boyfriend thinks she’s cheating on him. But Charlotte knows what’s really wrong: She is one of the Forgotten, a kind of angel on earth who feels the Need—a powerful, uncontrollable draw to help someone, usually a stranger.

But Charlotte never wanted this responsibility. What she wants is to help her best friend, whose life is spiraling out of control. She wants to lie in her boyfriend’s arms forever. But as the Need grows stronger, it begins to take a dangerous toll on Charlotte. And who she was, is, and will become—her mark on this earth, her very existence—is in jeopardy of disappearing completely.

Charlotte will be forced to choose: Should she embrace her fate as a Forgotten, a fate that promises to rip her from the lives of those she loves forever? Or is she willing to fight against her destiny—no matter how dark the consequences?

“A clever and well-written fantasy. Whether Charlotte is an angel or a being less freighted by religious tradition is left up to the reader, but the dilemma of how we can make a lasting impression is a very human concern. Young offers an elegant solution that is well worth consideration.”
— Booklist, starred review

“A gripping supernatural romance… An imaginative twist on the timeless battle between dark and light.”
— Kirkus Review

And here’s my interview with the author, Suzanne Young!

A NEED SO BEAUTIFUL sounds like such a great concept. How did you come up with the idea?

A family member was sick and I was feeling lost. At my lowest point a stranger gave me advice and it helped me through the tough times. I often wondered how she was there, just when I needed her. It sparked the idea of these beings from the light, meant to help others. And A NEED SO BEAUTIFUL was born.

The novel. My original title was just BEAUTIFUL—but that was taken. So I thought about it and came up with A NEED SO BEAUTIFUL. And after that, I couldn’t imagine calling it anything else.

What’s your strangest writing quirk or habit? Something that would make all of us go, “huh?”

I like to eat candy corn or other tiny food items while I work.

I love the name Charlotte! How do you come up with your character names?

I discovered a site for old fashioned baby names and now I’m hooked. My characters sometimes go through a few different name changes before I find the perfect fit.

What are you working on now?

The sequel is called A WANT SO WICKED and comes out next summer, so I’m busy revising. I also have a new series THE PROGRAM that comes out Spring of 2013 from Simon Pulse.

About the author:
Suzanne Young currently lives in Portland, Oregon, where she uses the rainy weather as an excuse to stay inside and write obsessively. After earning her degree in creative writing, Suzanne spent several years teaching middle school language arts. Now she can be found at home chasing after her two children and poorly behaved dog and writing novels for teens. You can visit her online at www.suzanne-young.blogspot.com or follow her on Twitter @suzanne_young.