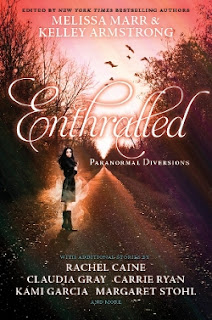 It’s time for another Guest Star! Our guest this week is Jeri Smith Ready, contributor to the brand new anthology, Enthralled

This collection of original paranormal YA short stories grew out of the 2010 Smart Chicks Kick It Tour, a multiauthor, multicity, author-organized tour of the US and Canada.  With it, these 16 authors hoped to bring a little taste of the Smart Chicks experience to readers everywhere.

About the story “BRIDGE”

In the world of the SHADE novels, everyone seventeen and under can see and hear ghosts, but no one else can.  So when Logan Keeley dies and his eighteen-year-old brother Mickey blames himself, they can’t ease each other’s pain or reconcile their rage.  Over the course of SHADE and SHIFT, Mickey sinks into a near-suicidal depression over Logan’s death.
“Bridge” is the story, told in free verse, of how two brothers, with the help of a stranger, forge the chasm between them to find a lasting peace.
“A solid collection of stories…Sarah Rees Brennan’s ‘Let’s Get This Undead Show on the Road’ follows a vampire in a boy-band and stands out with its perfect blend of snark and sincerity. It’s followed in a one-two punch by Jeri Smith-Ready’s intense and earnest ‘Bridge.’…This collection is ideal as a sampler tray for paranormal readers looking to pick up new authors to follow or to further explore the fictional worlds they already know.
—Kirkus Reviews
A standout among the many paranormal-themed anthologies.
—Bulletin of the Center for Children’s Books (Recommended review)

And here’s my interview with the author, Jeri Smith-Ready

My favorite part was trying something different-writing in free verse. I’ve always loved reading it, in books by authors like Ellen Hopkins, Lisa Schroeder, and Jame Richards.  It drills down to bare emotions and forces the writer to choose precise words to express their meaning.  I loved creating rhythms and sounds to reinforce the feelings and thoughts Logan was trying to get across.

My least favorite part is my fear that I did it wrong.

Hands down: Twitter.  I’ve never been addicted to anything-food, video games, drugs-but I’m addicted to Twitter.  It’s like my lifelife to other people.  I have this fear that if I leave it for a day, everyone will forget about me.  So it’s more than an addiction, it’s a full-blown existential crisis! 😉

If your main character, Logan, could give one piece of advice to teenage girls, what would it be?

Since he died from a mixture of drugs and alcohol (not an overdose, but a deadly combination), he would definitely warn teens to stay away from that stuff.  Especially alcohol, because it makes you do stupid things (like take drugs).

As a guy talking to girls, he would say to watch out for “bad boys.” They’re so popular in YA literature, but in real life, they’re not secretly good on the inside, waiting for the right girl to come along and redeem them.  They’re just bad. Except Logan would use a harsher word than “bad.”

I would love to be a musician!  I’ve always dreamed of performing in a band-I guess that’s why I love reading aloud so much.  And to have the close relationship he has with his siblings, both the ones in the band (Siobhan and Mickey) and his younger brother Dylan.  My brother and sister are eight and ten years older, and while we’re close now, when I was growing up it was like having four parents.

I wouldn’t want to live in a world with ghosts everywhere, even if I wasn’t young enough to see them.  That would be really creepy.

I’m still revising/perfecting SHINE, the third part of the SHADE trilogy, which comes out May 1.  Then I’ll write the final book in my adult vampire series, LUST FOR LIFE, which comes out next October.

Then I start my first YA contemporary, slated for a Fall 2013 release. We’ll be announcing more details next month, but I can tell you this much: 1) it’s about a boy and 2) I am very, very excited about it!

JERI SMITH-READY has been writing fiction since the night she had her first double espresso. Her nine published books include two series for adults and the SHADE trilogy for teens, about a world of ghosts only the young can see, which concludes May 2012 with SHINE.  Like many of her characters, Jeri enjoys music, movies, and staying up very, very late.  Visit her at www.JeriSmithReady.com, or on Facebook (www.facebook.com/JeriSmithReady) or Twitter (http://twitter.com/jsmithready), where she spends way too much time.  Logan himself can be found on Twitter @keeley_logan, as can his rival/”brother-in-pulp,” Zachary Moore (@moore_zachary).  The boys love to chat with each other and with their real-life fans.