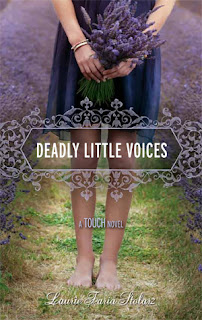 Camelia Hammond thought her powers of psychometry gave her only the ability to sense the future through touch. But now she’s started to hear voices. Cruel voices. Berating her, telling her how ugly she is, that she has no talent, and that she’d be better off dead. Camelia is terrified for her mental stability, especially since her deranged aunt with a suicidal history, has just moved into the house. As if all of that weren’t torturing enough, Camelia’s ex-boyfriend, Ben, for whom she still harbors feelings and who has similar psychometric abilities, has started seeing someone else. Even her closest friends, Kimmie and Wes, are unsure how to handle her erratic behavior.

With the line between reality and dream consistently blurred, Camelia turns to pottery to get a grip on her emotions. She begins sculpting a figure skater, only to receive frightening premonitions that someone’s in danger. But who is the intended victim? And how can Camelia help that person when she’s on the brink of losing her own sanity?

I cover my ears, but the insults keep coming.

“Just do it,” a voice whispers.  It’s followed by more voices, of different people.  They talk over each other and mingle together, producing one clear cut message – that I’m a waste of a life.

I rock back and forth, trying to remain in control.  I smother my ears with the sheet.  Press my forehead against my knees.  Pound my heels into the floor, bracing myself for what comes next.

Meanwhile, there’s a drilling sensation inside my head; it pushes through the bones of my skull, and makes me think that I’m going crazy.

“Please,” I whisper.  More tears sting my eyes.  I shake my head, wondering if maybe I’m already dead, if maybe the voices are part of hell.

Check out the book trailers

From the author: “In keeping with Touch series tradition, in celebration of the release of DEADLY LITTLE VOICES, I’m launching my annual “winner-gets-to-have-a-minor-character-named-after-him/her” contest!  The grand prize winner will get to have a minor character in DEADLY LITTLE LESSONS, the fifth and final book in the TOUCH series named after him or her.  Other prizes include autographed book copies and the opportunity to have original work appear on my web site, Facebook, and Twitter pages.  OFFICIAL RULES and GUIDELINES for this contest are on my website, under NEWS.  ALL ENTRANTS MUST SIGN A RELEASE FORM, DOWNLOADABLE FROM WWW.LAURIESTOLARZ.COM/NEWS.html. Sign up for my e-Newsletter for updates on contest, book, and appearance info:http://www.lauriestolarz.com/newsletter.html


Praise for the TOUCH series

“An engaging, eerie tale about the darker side of relationships – when it becomes a matter of life and death to know who your friends are.” – KLIATT

“The book was full of shocking surprises and revelations, earning the book five stars. This is a must-read for fans of romance, suspense, and mystery because it won’t disappoint.” – Teens Read Too (DLL)

“Laurie Faria Stolarz is a master creator of suspense and romance. Her words cause the heart to pound, the palms to sweat, the spine to shiver, and the stomach to flutter. The trepidation born from the anonymous threats will make the pages fly, and the palpable tension between Camelia and Ben as they attempt to ignore their hearts causes the fire to burn hotter.” – TeenReads.com

How to bring your psychometric senses to fruition

1. Make yourself comfortable in a place that feels “sacred” to you. For some it’s outside, surrounded by nature; for others it’s a favorite chair or surrounded by candles; for me, it’s wherever I’m doing pottery.
2. Close your eyes and concentrate on your breath, letting go of any stray or nervous thoughts.
3. Now, take an object in your hand. A good idea is to have someone give you something they’ve owned for a long time, i.e. a favorite bracelet or a set of keys.
4. Close your eyes again and concentrate on this object. Be aware of any thoughts or feelings that come about as a result of holding this object. Talk those ideas through, even if they seem silly or insignificant, but never make information up.

Remember, this takes practice and a bit of experimenting. The goal is to begin tuning in to your own inner awareness and your ability of perception. What often works for me is asking a question aloud, and then sculpting out the answer, using my power of touch in a creative and organic way.