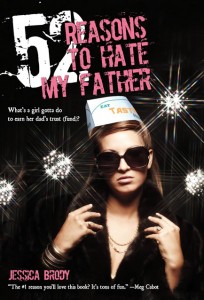 So I know you’ve all been on the edge of your seats to see who’s going to be in the book trailer for 52 REASONS TO HATE MY FATHER (or maybe that’s just me). But regardless the wait is OVER!

The trailer is now cast and filming THIS week! And we’re releasing the cast photos on Facebook over the next few days.

AND just to make it more interesting, we’ve decided to make a little contest out of it. We’ll be giving away THREE signed ARC (advanced reader copies) of the book to three lucky winners! All you have to do to enter is comment on the cast photos (they’ll be three photos posted in the next three days, so you’ll have THREE chances to win!

Well, anyway, without further ado, the first cast member is up on my Facebook page now (and it’s a deliciously hot boy!) Go to www.Facebook.com/JessicaBrodyFans and enter to win (or just drool…that’s what I’ve been doing!)

And be sure to check back on Tuesday and Wednesday for more cast photos and on Thursday when we release the winners! Oh and don’t forget to LIKE the page, so you can see if you won!

Happy Monday to you all!

Tagged with: 52 Reasons to Hate My Father Book Release