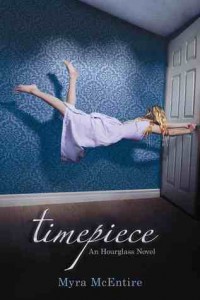 It’s time for another Guest Star! Our guest this week is Myra McEntire, author of the brand new release, Timepiece!

Kaleb Ballard was never supposed to be able to see ripples—cracks in time. Are Kaleb’s powers expanding, or is something very wrong? Before Kaleb can find out, Jonathan Landers, the man who tried to murder his father, reappears. Why is he back, and what, or whom, does he want?

In the wake of Landers’s return, the Hourglass organization is offered an ultimatum by a mysterious man. Either they find Landers and the research he has stolen on people who might carry the time gene, or time will be altered—with devastating results for the people Kaleb loves most.

Now Kaleb, Emerson, Michael, and the other Hourglass recruits have no choice but to use their extraordinary powers to find Landers. But where do they even start? And when? Even if they succeed, just finding him may not be enough. . . .

The follow-up to Hourglass, Timepiece blends the paranormal, science-fiction, mystery, and suspense genres into a nonstop thrill ride where every second counts.

Myra has a contest on her site – www.MyraMcEntire.com – that will run from June 18th to June 25th. She’ll be giving away signed copies of HOURGLASS and TIMEPIECE, signed posters of the covers, a goodie basket inspired by her characters, and signed books from other authors!

Check out our Q&A with the Author:

Getting it right. Least favorite? Getting it wrong, trashing it, and starting over. WOE.

If you could have dinner with one of your characters who would it be?

The one I’m writing about now. I need to do a little brain picking.

This series would make an awesome movie. Any interest from studios or producers?

If your main character, Kaleb, could give one piece of advice to teenage girls, what would it be?

The third Hourglass book, titled INFINITYGLASS. (That title makes no sense until you read TIMEPIECE, but it will.)

Myra McEntire knows the words to every R&B hit of the last decade, but since she lives in Nashville, the country music capital of America, her lyrical talents go sadly unappreciated. She’s chosen, instead, to channel her “mad word skills” into creating stories. She’s an avid Doctor Who fan and will argue passionately about which incarnation is the best.