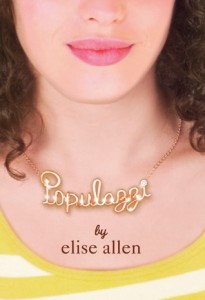 It’s time for another Guest Star! Our guest this week is Elise Allen, author of the paperback release of Populazzi!

WHAT WOULD YOU DO if you had the chance to erase your past and reinvent yourself as the person you’ve always wanted to be? Would you grab it? Would you stick with it, no matter what the consequences?

Cara Leonard always wished she could be one of those girls: confident, self-possessed, and never at a loss for the perfect thing to say. One of the Populazzi.

It always seemed impossible… but now could be her chance.

When Cara moves to a new school just before junior year, her best friend urges her to seize the opportunity and change her life… with the help of The Ladder. Its rungs are relationships, and if Cara transforms herself into the perfect girlfriend for guys higher and higher on the Popularity Tower, she can reach the ultimate goal: Supreme Populazzi, the most popular girl in school.

The Ladder seems like a lighthearted social experiment — a straight climb up — but it quickly becomes gnarled and twisted. And when everything goes wrong, only the most audacious act Cara can think of has a chance of setting things even a little bit right.

Some reaction to the book:

“In her first solo novel, Allen offers a smart mix of hilarity and tragedy in this Macbeth–meets–Mean Girls tale.” — Publisher’s Weekly
“The story unflinchingly depicts the dark and dangerous side of high-school popularity, making it a captivating read.”—Kirkus Reviews

And she’s got a Fantastic Giveaway:

To thank everyone for their support with the paperback launch, Elise is doing a giveaway on her blog where commenters can win a pack of five books — Populazzi plus books from the four authors who blurbed it. Here’s a link to that: Read more about the Contest!

In honor of 52 REASONS TO HATE MY FATHER, I’m asking all my guest stars about the worst job they’ve ever had! Here’s what Elise had to say:

I moved to L.A. right after college, with nothing in my pocket but my Bat Mitzvah money.  (See, kids?  All that Bat Mitzvah studying is totally worthwhile.  The bonds will mature while you’re in high school and college, then wham!, you use them to make like the Muppets in the real Muppet Movie and zoom across the country to pursue your dream!)

The money was enough for first and last month’s rent, plus an apartment full of used furniture… but I needed to eat.  Since my dream job of “rich and famous actress” wasn’t hiring at the moment, I had to grab whatever I could, right away.  So when I saw a want-ad in Backstage that said the job was “perfect for young actors with great people skills,” I jumped at it.

The “office” was a shoddy-looking duplex in Hollywood.  The inside was emptied of all furniture except for three long tables, each of which was covered by telephones.  The “job” was to sit at one of the phones and cold-call people, then use your “improv skills” to convince people to tell you the serial numbers of their copiers.  (Everyone on the list had a copier; that wasn’t a question.)

Honestly, anytime you need to use that many air quotes to describe a situation, you know it won’t be good.

But wait, there’s more.  My “bosses” even had suggestions for “roleplaying methods” to get the numbers out of people.  No, of course we couldn’t tell them the truth; rather, we could say we were “taking inventory” so we had their model number on file in case of a recall.  Or we could say we were “conducting a survey.”

It was obvious something very shady was going on, and equally obvious that I was the only one who cared.  I was also the only one dressed for “the office,” in a terribly cute-professional skirt and top.  The other twenty people wore ragged jeans, T-shirts, makeup blurred from the night before… it’s possible one of the people was actively giving someone else a tattoo.

I did make one call before I walked out.  Not sure why – I think part of me couldn’t believe anyone would be so ballsy as to advertise for people to aid and abet a scam.  The woman who answered… okay, I don’t know what she was like, really, but she sounded like a frail little old woman thrilled to have company on the phone, and she practically leapt at the chance to give me her copier serial number.

I didn’t write it down.  I hung up and left.  I worried for a second that my unsavory “employers” had my information, but then I remembered I never filled out any paperwork; all payment was, oddly enough, under the table.

That was my worst job and also my shortest.  My next job lasted a few weeks longer, but was almost as abhorrent.  I was a telemarketer for Great Expectations, a dating service.  My mission?  Call single people and convince them they will never never never meet anyone unless they spend an insane amount of money and sign up with Great Expectations.  I have lots of stories from that venture… but I’ll save them for another time.

After starting her career in television, Elise Allen has emerged as a vibrant new voice in teen fiction. She is the co-author of Hilary Duff’s New York Times Bestseller Elixir, as well as its sequels, Devoted and True. She received an Emmy nomination for her work on the PBS show Dinosaur Train, and fulfilled a lifelong dream when she wrote for the Muppets. She lives in Los Angeles, where she indulges her inexplicable desire to run marathons.