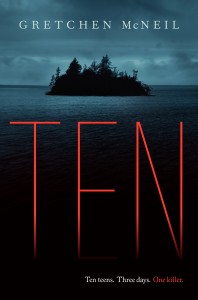 It’s time for another Guest Star! Our guest this week is Gretchen McNeil, author of the paperback release of Ten!

And their doom comes swiftly.

It was supposed to be the weekend of their lives – three days on Henry Island at an exclusive house party. Best friends Meg and Minnie each have their own reasons for wanting to be there, both of which involve Kamiak High’s most eligible bachelor, T.J. Fletcher. But what starts out as a fun-filled weekend turns dark and twisted after the discovery of a DVD with a sinister message: Vengeance is mine.

Suddenly, people are dying and the teens are cut off from the outside world. No electricity, no phones, no internet, and a ferry that isn’t scheduled to return for two days. As the deaths become more violent and the teens turn on each other, can Meg find the killer before more people die? Or is the killer closer to her than she could ever imagine?

“TEN is a real page turner! Gretchen McNeil knows how to plot a thriller: Her setup is flawless and the suspense kept me on the edge of my seat.” – Christopher Pike, #1 New York Times bestselling author of the THIRST series and REMEMBER ME

“Gretchen McNeil’s TEN is my new number one! I jumped at every creaking floorboard in my house and on the page. This is sure to be a teen thriller classic!” –  Nancy Holder, Bram Stoker Award winning author of THE SCREAMING SEASON

“You want to read this book. McNeil incorporates all the thrills and chills of a horror movie into this fast-paced, gripping tale. With its quippy dialogue, it’s like reading Scream. This reviewer got the willies while reading Ten on a sunny afternoon.” – Top Pick in Romantic Times, September 2012

“A scary gorefest of murder and mayhem, not for the faint of heart […] a breathless read.” – Kirkus

In honor of 52 REASONS TO HATE MY FATHER, I’m asking all my guest stars about the worst job they’ve ever had! Here’s what Gretchen had to say:

Have you followed my Twitter feed about my day job, populated by 3 Lunches Guy, the Angry Old Lady, the Blind Albino and my tech-challenged boss?

Gretchen McNeil is an opera singer, writer and clown.  Her YA horror POSSESS debuted with Balzer + Bray for HarperCollins in 2011.  Her follow up TEN – YA horror/suspense about ten teens trapped on a remote island with a serial killer – will be released September 18, 2012, and her third novel 3:59, sci fi doppelganger horror is scheduled for Fall 2013.  Gretchen’s new YA contemporary series Don’t Get Mad (Revenge meets The Breakfast Club) begins Fall 2014 with GET EVEN, followed by the sequel GET DIRTY in 2015, also with Bazler + Bray.

Gretchen is a former coloratura soprano, the voice of Mary on G4’s Code Monkeys and she sings with the LA-based circus troupe Cirque Berzerk.  Gretchen blogs with The Enchanted Inkpot and is a founding member of the vlog group the YARebels where she can be seen as “Monday.”