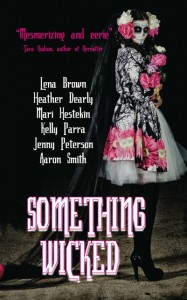 It’s time for another Guest Star! Our guest this week is Kelly Parra, one of the MANY fabulous author contributors to the new anthology, SOMETHING WICKED

Beware the Midnight Troll on your late-night stroll by Mari Hestekin. Swim at your own risk Under Loch and Cay by Jenny Peterson. A curse of spiders on campus means Arach War by Lena Brown. Through a Glass Darkly one could lose a soul by Heather Dearly. Supernatural Hunters turn to the sea in Mermania by Kelly Parra. Social media goes to the ghouls in Spectral Media by Aaron Smith.

Don’t miss this paranormal fun for tween, teens and adults!

Kelly Parra’s short story “Mermania” continues Teen Supernatural Hunters Jaz and Blake’s paranormal adventures. The duo debuted in “Darkness Becomes Him” in the young adult anthology PROM DATES TO DIE FOR as they battled a soul hungry dark angel. In SOMETHING WICKED a merman entrances Jaz and it’s up to her and Blake to rush against time before Jaz grows her own tail by the full moon!

In honor of 52 REASONS TO HATE MY FATHER, I’m asking all my guest stars about the worst job they’ve ever had! Here’s what Kelly had to say:

I had to take some time to think about this because I had my fill of jobs. But what made the jobs good or bad was the management. If I had a good manager then things would be fine. If I had a strange manager, the job didn’t work out so well.

Could it have been the job with little, overly righteous pizza owner? Or possibly the job with the blunt bookstore owner that praised all the girls about their looks? Awkward!

Oh wait, I have it. When I was a teenager I worked at an ice cream shop. It wasn’t a bad job until the assistant manager, who was in college at the time, had an erratic relationship with his girlfriend. One night she came to the shop after we were closed. Apparently they were in an argument and she had emotional problems. She began to kick the glass door. Repeatedly! Until the edges of the frame fell off.

Imagine me, sixteen, nervously watching this happen. While he tells me to ignore her while I want to call the police. He worked it out with the owner to pay for damages and charges were never filed. Oh the joy of my teenage years.

Kelly Parra’s earliest stories were told with paintbrushes, but upon discovering the drama and forbidden love of romance and suspense novels, those paintbrushes were replaced with a keyboard. Now a multi-published author in young adult and romance fiction, she has created memorable characters such as a graffiti artist in Graffiti Girl, a psychic teen in Invisible Touch, and a tough undercover narc in her novel for adults, Criminal Instinct. A two-time RITA finalist, she divides her time between her novels, short fiction, and the adventures of motherhood, where she juggles her home life with two children, a tattooed husband, a sweet poodle, and a rowdy pit bull. Visit her website www.KellyParra.com.