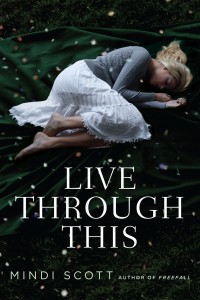 It’s time for another Guest Star! Our guest this week is Mindi Scott author of LIVE THROUGH THIS.

About LIVE THROUGH THIS:

From the outside, Coley Sterling’s life seems pretty normal . . . whatever that means. It’s not perfect—her best friend is seriously mad at her and her dance team captains keep giving her a hard time—but Coley’s adorable, sweet crush Reece helps distract her. Plus, she has a great family to fall back on—with a mom and stepdad who would stop at nothing to keep her siblings and her happy.

But Coley has a lot of secrets. She won’t admit—not even to herself—that her almost-perfect life is her own carefully-crafted façade. That for years she’s been burying the shame and guilt over a relationship that crossed the line. Now that Coley has the chance at her first real boyfriend, a decade’s worth of lies are on the verge of unraveling.

In this unforgettable powerhouse of a novel, Mindi Scott offers an absorbing, layered glimpse into the life of an everygirl living a nightmare that no one would suspect.

Praise for LIVE THROUGH THIS:

“What makes this more than another ‘problem’ novel is the author’s steadfast refusal to deal in stereotypes and easy answers.” –Kirkus Reviews, Starred Review

“Harrowing, sad, funny, and romantic. I couldn’t put it down.” –Stephanie Perkins, author of Anna and the French Kiss

“Intensely emotional and beautifully crafted, I savored every word.” –Amanda Grace, author of In Too Deep

In honor of 52 REASONS TO HATE MY FATHER, I’m asking all my guest stars about the worst job they’ve ever had! Here’s what Mindi had to say:

When I was 22, I got a job as a receptionist for a law office in downtown Seattle. The pay at this reception job was better than for my previous position elsewhere as an attorney’s assistant, so I had no idea what a huge step down this new job would be.

I wasn’t given a computer at the reception desk. Instead, I had a typewriter, upon which I was supposed to type labels during my downtime. Except . . . I had very little downtime because I had ten phone lines ringing nonstop. A big part of the business was bankruptcy filings, so I’d been warned by the office manager that creditors were going to call and be very nasty toward me. That wasn’t true at all. It was the clients who were awful; they were frustrated that the attorneys and staff wouldn’t return their calls.

Speaking of the attorneys and staff, they yelled at me so many times that I lost count. One of legal assistants told me to shut up when I paged her with a phone call. I put up with three and a half days of abuse, and then handwrote a letter of resignation (you know, because I didn’t have a computer), turned it in, walked out, and never regretted it.

Mindi Scott is the author of Live Through This and Freefall. She lives near Seattle, Washington, with her drummer husband. Please visit her online at mindiscott.com.