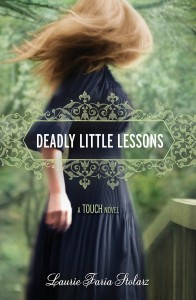 It’s time for another Guest Star! Our guest this week is Laurie Faria Stolarz, author of the new release, DEADLY LITTLE LESSONS!

Camelia Hammond’s trying junior year of high school is finally over…but her troubles aren’t. After she discovers a painful truth about her family, she escapes to a summer arts program in Rhode Island. Determined to put family – and boyfriend – drama behind her, she throws herself into her artwork.

At the arts school, she gets caught up in the case of Sasha Beckerman, a local girl who is missing. Even though all signs suggest that the teen ran away, Camelia senses otherwise. Eager to help the girl, she launches her own investigation. Meanwhile, Camelia realizes how much she misses Ben, despite being committed to Adam.

But time is running out for Sasha, and Camelia will have to trust her powers if she’s to save her. Will the lessons Camelia has learned in the past give her the strength to do so?

In honor of 52 REASONS TO HATE MY FATHER, I’m asking all my guest stars about the worst job they’ve ever had! Here’s what Laurie had to say:

The worst job I ever had was at a magazine that published the classified ads for cars.  I sat in a tiny room, at a tiny table, with four other people.  For nine hours, using an x-acto knife, I had to cut out photos of cars (the photos that the owners of the cars had sent in).  I then had to lay the photos on a board and highlight them in blue – my color code.  The color code was used as a tracking system. So, if I accidentally had cut off a bit of the fender, my superiors would be able to call me out on it.  There was no talking allowed.  If you wanted to go to the restroom, you had to raise your hand.  You got a ten minute break and a half-hour lunch.  I only lasted a week there.

In celebration of the release of DEADLY LITTLE LESSONS, I’m so excited to announce the launch of a brand new contest.  I’m calling it Karma Chameleon – yes, after the Boy George song from the ’80’s (in case any of you have heard of it; if not, you can YouTube it for fun).  I’m naming it that, not because of Boy George or his song, but because the contest is all about karma – good karma that is, and the spreading of it, and because, five books later, I thought it’d be the perfect time to celebrate Camelia from the Touch series (recall that Camelia’s real name is Chameleon).

The contest is all about giving and getting – hence the karma part.  As many of you know, the law of karma, in its simplest definition, is that whatever you put out to the world – energy or otherwise, good or bad – comes back to you.  And so, in the spirit of good karma, let’s spread some goodness.   I want to encourage readers to do a good deed, i.e. organize a fundraiser or food drive, volunteer to tutor or teach something, visit the elderly or a children’s hospital.  All good-karma submissions will be entered into a drawing to win autographed copies of some of my Touch series books. I’ll be sharing the most inspiring stories on my website and Facebook, and I’ll Tweet about them as well (with your permission, of course).  For more information, see the official guidelines and rules on my web site: www.lauriestolarz.com/news

For more information, please visit her Web site at www.LaurieStolarz.com