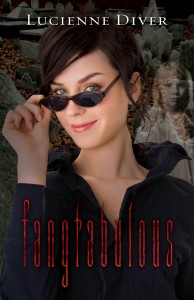 It’s time for another Guest Star! Our guest this week is Lucienne Diver, author of the new release, FANGTABULOUS!

Gina Covello and her band of federal fugitives are on the run after taking down a secret (and sinister) government facility. Strapped without cash or credit cards—a fate worse than death for Gina—the rebels must find a place to lay low. They roll into Salem, Massachusetts, the most haunted town in America and the only place they have friends flying under the radar. But within a day, Gina and her gang are embroiled in a murder mystery of the supernatural kind.

Someone—or something—is strangling young women, and it’s rumored to be the ghost of Sheriff Corwin, late of the Salem Witch trials.  Is it the ghostly Sheriff or is someone on this side of the veil using the famous story as a cover up? Gina is determined to get to the bottom of this mystery, and she needs to do it before a paranormal reporter on the scene exposes them for what they are…fanged federal fugitives.

In honor of 52 REASONS TO HATE MY FATHER, I’m asking all my guest stars about the worst job they’ve ever had! Here’s what Lucienne had to say:

I don’t know that I’ve ever had a sucky job.  I’ve had interesting ones, certainly.  One of the most fascinating was working at a tuxedo shop the summer I was nineteen.  What could be so fascinating?  The stories, of course!  For one, there was the bride who broke into tears when she came to return the groom’s tux and we asked how the wedding went.  As you can imagine, this is not the usual reaction, so we got her a tissue, patted her on the back and asked her what happened.  It turned out her family was connected—in the Sopranos kind of way—and didn’t approve of the groom.  Guns came out, the bride and groom had to flee and change their honeymoon plans so that the families couldn’t find them until after everything died down!   Another interesting fact: you could always tell which guy was the groom when the wedding party arrived to pick up their tuxes…he was always the guy who flirted the most.  (One of his last chances, I guess.)

“Another amusing romp in the series, this installment also sees its hardy heroine beginning to mature, adding further dimension to her character.

For the Vamped series:

“Diver spins an action-packed story that is filled with humor. Gina is a sassy heroine who tackles issues and challenges with proper vampire style.” —School Library Journal

“Diver successfully creates a vampire teen who is active and assertive and has no time for angst. Gina has a biting, sarcastic voice that makes the Vamped books quick and entertaining reads.”—VOYA

“There is enough grit and wit in this installment to keep adults engaged, as well as plugged-in co-eds. So take a fabulous spin. And stay tuned for book #4, Fangtabulous” — Comicmix

Lucienne Diver writes the humorous, suspenseful Vamped series of young adult vampire novels for Flux Books, including Vamped, Revamped, Fangtasticand the most recent, Fangtabulous.  Her short stories have been included in the Strip-Mauled and Fangs for the Mammaries anthologies edited by Esther Friesner (Baen Books), and her essay on abuse is included in the anthology Dear Bully: 70 Authors Tell Their Stories (HarperTeen).  She also writes the Latter-Day Olympians urban fantasy series for Samhain (Bad Blood, Crazy in the Blood and the forthcoming Rise of the Blood).

For more information, please visit her Web site at www.LucienneDiver.com