THE FIDELITY FILES On Its Way to the Big Screen! 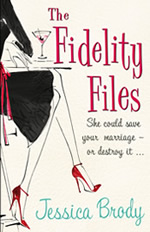 In case you didn’t happen to catch it from my whirlwind of ecstatic tweets and Facebook posts yesterday, I’m BEYOND excited to announce that THE FIDELITY FILES and its sequel LOVE UNDER COVER (aka THE GOOD GIRL’S GUIDE TO BAD MEN in the UK) have been optioned for film!!!!!

Click here to read the exclusive announcement in Deadline Hollywood!

The producers, Bella Le and Robert Galinsky (who both live in Australia), are fantastic and have such an amazing vision for the film. I knew from the first time I spoke with them on the phone, that they were the right people for the job and I was thrilled that they’d found the books.

Here’s what I know so far:

THE FIDELITY FILES (women’s fiction) was my debut novel. The book tells the story of Jennifer Hunter (code name: Ashlyn), a sophisticated L.A. woman who goes undercover as a “fidelity inspector,” to find out who’s faithful and who’s not. Read the full synopsis plus the first chapter.

So far the book has been published in the US, UK, Australia, France, Germany, Taiwan, Russia, Czech Republic, and is scheduled to release in Brazil soon. Click here for a full list of foreign publishers.

Order a copy of THE FIDELITY FILES!