Welcome back to the second installment of UNREMEMBERED MONDAY!

This week’s guest author is the lovely and talented Anna Banks, author of OF POSEIDON (which I just finished and am TOTALLY obsessed with!) and the forthcoming sequel, OF TRITON (check out the swoon-worthy cover that was just unveiled!) which will be released in May.

AND I’m giving away a copy of OF POSEIDON right here on my blog this week!

So without further ado…here’s Anna!

When Jessica asked me if I’d be interested in doing a guest post about unremembering stuff (unremembering is officially a verb now), I knew I had to do it. I know her new release UNREMEMBERED is a whole lot deeper than what I’ve got listed here. Deeper, and better, and will blow your mind. My post is not intended to blow your mind, just five minutes of your day.

As you can guess, there are many complications to undo memories—memories that make you who you are. Even the smallest things we say or do become a part of us. So you can be assured I kept that in mind before I wrote this. Mostly.

But I’ve chosen some memories that I feel in my heart wouldn’t affect me one bit if I got rid of them. In fact, dumping these memories from a plane over the Bermuda Triangle might actually improve my life. My self-image. My self-worth.

As you all may know, I’m about as deep as a tablespoon. As such, I can’t be easily embarrassed. So I stand a lot to lose when I actually DO get embarrassed. (Imagine the self-worth spilling from the tablespoon).

So. These are the few times I DID get embarrassed. And since there doesn’t seem to be a “lesson learned” attached to them, I’d be willing to unremember. More than willing.

1.)    This haircut. I mean, really? Can you imagine what the photographer was thinking? Probably worried about breaking his lens, and wondering what kind of parents would dress their little boy up in a frilly green dress. And why the eff was I smiling? 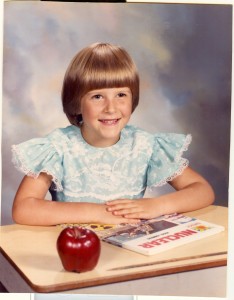 2.)    This tweet sequence. It was just a few days ago. I was watching Step Up Revolution, and I was uh, admiring the lead male role (who is Ryan Guzman, FYI). Fellow author Scott Speer (author of IMMORTALCITY) happened to be the director of the movie, so I casually tweeted him this:

“OMG @_scott_speer ! Who is the leading male in #StepUpRevolution and where can I get one? *swoons*”

And he responded with this:

“@ryanAguzman you have yet another fan. @ByAnnaBanks would like to borrow you for the weekend.”

3.)   I sprained my ankle falling off the toilet. Third degree sprain. And that’s all I have to say about that.

LOL! Hilarious, as usual, Anna! What? No picture of number 3? 🙂 Thanks for participating in UNREMEMBERED MONDAY!

Now let’s giveaway a book! Please use the widget below to enter to win OF POSEIDON by Anna Banks! (Giveaway is open internationally)

if (WIDGETBOX) WIDGETBOX.renderWidget(‘42113289-3937-435d-bbbb-33d6824b92ba’);
Get the Countdown Creator Pro widget and many other great free widgets at Widgetbox! Not seeing a widget? (More info)Pre-Order Unremembered Today!

Tagged with: Anna Banks Of Poseidon Of Triton Unremembered Monday