This week I welcome the amazing Gennifer Albin, author of CREWEL (the first in the CREWEL WORLD trilogy). You guys, I just read this book and it’s pretty much the most creative, imaginative concept for a story I’ve ever seen. It was truly remarkable!

And to celebrate Gennifer coming on “Unremembered Monday,” I’m giving away a copy of CREWEL right here on the blog!

Check out Gennifer’s post below in which she tells us about the memory she would most like to be “Unremembered.” It’s a good one! 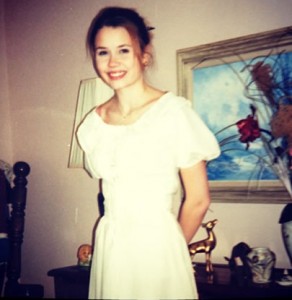 In high school, I was a bit of an actress.  Call it I symptom of having an overly-dramatic personality.  I spent most weekends doing competitive drama, and I even went to the National competition my junior year.  That same year I got the opportunity to do something I always dreamed of doing.  My coach asked if I wanted to compete in a monologue competition hosted by our local Renaissance Fair.  Dress up in Renaissance garb and perform Shakespeare?  I’m not even sure why she asked.  So I got an amazing dress and started looking for female monologues, which as it turns out was no small feat.  Finally, I settled on a monologue from The Taming of the Shrew.

At this point in my life it was my goal to be a working actress, specializing in Shakespeare. I understood the language and loved it.  I was pretty confident that I would nail it.  But I didn’t spend enough time practicing.  I was a busy high school junior, remember?  I had dates and gossip to keep up on.  The day of the festival rolled around and after a harrowing incident in the parking lot where one of my friends ripped an entire fingernail off (I still shiver thinking of it), we got ready to perform.  As it turns out, my elementary school was even there for the day.  I waltzed up to spout Katherine’s final monologue, got two lines in and completely FORGOT the rest.  I remember looking to my coach with a very unlike-me look of frozen terror on my face.  She just looked surprised.  Seconds ticked by.  The audience waited.  I tried desperately to remember a single line, finally managing to land on one.  I finished the monologue, butchering the Bard in the process, and took my seat, absolutely humiliated.  I had never forgotten a line before, much less froze on stage!

There’s no a lot of moments in my life I’d like to unremember.  I tend to find value even in my most egregious screw-ups, but I won’t lie, I would sure like to unremember the time I forgot all my lines and made a total ass of myself at the Renaissance Fair.  I doubt Bottom could have made a bigger fool of himself.

Thank you, Genn, for participating in UNREMEMBERED MONDAY!

Now let’s give away Genn’s book! Please use the widget below to enter to win CREWEL. (Giveaway is open internationally)