In honor of the book (which releases March 5!), every Monday, I’m featuring an awesome guest author (and book giveaway) and asking them to answer the following question:

This week we have the one and only, the fantastic, the lovely Marissa Meyer, author of the New York Times bestselling Lunar Chronicles series! Book 1, CINDER, is a sci-fi, futuristic retelling of the classic Cinderella and book 2, SCARLET, continues the compelling saga with a sci-fi retelling of Little Red Riding Hood! But today, Marissa takes time off from her busy fairy-tale life in order to answer the question, “Which memory would you most like to be “Unremembered?”

So here she is…Marissa Meyer! 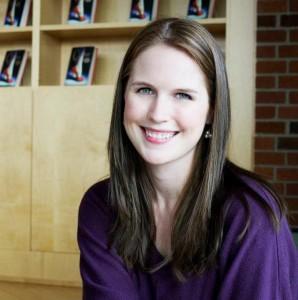 When Jessica asked me to write a blog post about a memory I would like unremembered, I began making a list. That was a few months ago. The list ended up being really, really long.

And yet, there was nothing on the list that, after a moment or two of painful remembering, I deemed worthy of being unremembered. Because each of those mortifying, horrifying, gut-wrenching moments has shaped me into the person I am today. A person I ended up being pretty darn proud of.

So no, I would not erase the time I was so deep into a daydream that I was literally talking to my imaginary friends, out loud, during my second-grade story time, only to realize that the entire class was staring at me when I finally snapped out of it. After all, if I hadn’t nurtured my imagination then, I may not be a writer today.

I would not erase the anger and mortification I felt when the teacher in charge of casting the school play told me not to bother auditioning for any of the lead roles because I didn’t “fit the body type”—this, of course, said in front of many of my peers. I was devastated, both because I loved acting, but also because I’ve struggled with being overweight since I was little and it was extra painful to be criticized for it by, of all people, a teacher I admired. However, that crushing blow was also what made me determined to take my health more seriously and eventually led to me getting my weight issues under control.

I would not erase the time I told my crush that a certain sappy song made me think of him, even though he didn’t reciprocate and it has entirely ruined an otherwise perfectly good song for me. Because it taught me not to do that.

I would not erase the time a very-virginal me wrote a very X-rated story to share with my very curious friends, only to have classmates I’d never spoken to approaching me by the end of the school day telling me how much they enjoyed reading it. Embarrassing at the time, yes, but my friends and I laugh about it now, and it taught me to be more careful who I share my writing with. (I never did get that story back… I’m just waiting for it to resurface!)

I would not erase that one make-out session with that one guy I didn’t even like, who felt like kissing an iguana… an iguana with very eager hands… *shudders* Because much as the memory still makes me cringe, it was just one step toward finding and appreciating the right guy for me.

There were plenty more, but they all came down to one thing. Mistakes made. Lessons learned. Personal growth achieved.

So I guess that’s it. After all my reminiscing, I’m afraid there isn’t a single memory that I would ever want—

I take it back. There is one memory…

(If you don’t know what that is, for all that is good in this world, don’t Google it.)

Please, please, someone take that memory away from me. Carve, dig, burn, or scrape it out if you have to. Seriously. Any time now. I’ll be waiting.

This was FANTASTIC! Thanks so much Marissa for your great take on the question! I’ll get the memory coders working on that last one asap!

Now, it’s time to give away some books! This week we’re giving away a copy of CINDER and SCARLET from Marissa Meyer’s Lunar Chronicles. Please use the widget below to enter and  specify which book you’d like to win!
a Rafflecopter giveaway

Humans and androids crowd the raucous streets of New Beijing. A deadly plague ravages the population. From space, a ruthless lunar people watch, waiting to make their move. No one knows that Earth’s fate hinges on one girl. . . .

Cinder, a gifted mechanic, is a cyborg. She’s a second-class citizen with a mysterious past, reviled by her stepmother and blamed for her stepsister’s illness. But when her life becomes intertwined with the handsome Prince Kai’s, she suddenly finds herself at the center of an intergalactic struggle, and a forbidden attraction. Caught between duty and freedom, loyalty and betrayal, she must uncover secrets about her past in order to protect her world’s future.

Cinder, the cyborg mechanic, returns in the second thrilling installment of the bestselling Lunar Chronicles. She’s trying to break out of prison–even though if she succeeds, she’ll be the Commonwealth’s most wanted fugitive.

Halfway around the world, Scarlet Benoit’s grandmother is missing. It turns out there are many things Scarlet doesn’t know about her grandmother or the grave danger she has lived in her whole life. When Scarlet encounters Wolf, a street fighter who may have information as to her grandmother’s whereabouts, she is loath to trust this stranger, but is inexplicably drawn to him, and he to her. As Scarlet and Wolf unravel one mystery, they encounter another when they meet Cinder. Now, all of them must stay one step ahead of the vicious Lunar Queen Levana, who will do anything for the handsome Prince Kai to become her husband, her king, her prisoner.