In honor of the book (which releases March 5!), every Monday, I’m featuring an awesome guest author (and book giveaway) and asking them to answer the following question:

I’m SUPER excited about this week’s guest author! She is one of my idols, one of the most prolific authors I know, and just an all around awesome gal! International bestselling author, Meg Cabot (The Princess Diaries, The Abandon Series, the Heather Wells Mysteries) joins us this week on Unremembered Monday to tell us about her most embarrassing moment that she may or may not want to Unremember. And to celebrate Meg’s appearance on my blog, we’re giving away a free copy of SIZE 12 AND READY TO ROCK, the latest installment of her bestselling Heather Wells Mystery series.

Now without further ado, I give you…Meg! 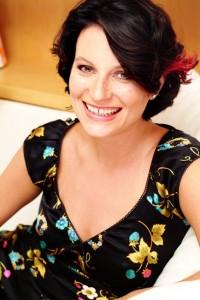 When Jessica mentioned she was looking for posts about memories wished “unremembered,” my first thought was, “I’m in,” because I adore Jessica and her books, and loved the idea.

My second thought was, “Oh, no. How am I going to pick just one embarrassing memory I’d like to unremember? I have so many.”

While I was trying to pick one I’d like to delete forever from my mind – for instance, the time at a party when I was quite a bit younger than I am now, and all the seats were taken, so I sat on top of a trashcan thinking the lid would hold my weight, but instead the lid collapsed inwards, so I fell into the trash butt-first, and could not get out of the trashcan due to the suction holding me inside, only none of my fellow party goers would help me out of the trashcan because they were all collapsed on the floor in tears of laughter – it occurred to me that this memory fell under the category of what a former boss of mine would call a “teachable moment.”

Before I became able to support myself on the money I earned through my writing alone (and that took many, many years), I worked as the assistant director of a 700 bed undergraduate residence hall at New York University.

Like the heroine of my mystery series about Heather Wells, the assistant director of a similar 700 undergraduate residence hall, I had many bosses while I was at NYU (mine kept getting promoted. Heather’s leave for various other reasons, often criminal).

That did not, of course, mean there weren’t consequences, some of which were tragic in nature. We all have memories that are deeply sad or even frightening that we sometimes wish we could unremember.

But looking back, I wouldn’t choose to erase those memories either, since they’ve helped shaped who I am today.

So now when I think about that time I was stuck butt-first inside that trash can – until my best friend finally stopped laughing and pulled me out – I tell myself, “Teachable moment.”

I’ve never sat on top of a trashcan again, and I always warn others not to, either.

LOVE this post! And what a horrific story! Anything involving a trash can just tops the embarrassment list in my book.

Now, it’s time to give away a book! Meg’s giving away a free copy of the latest installment of her Heather Wells mystery series, set in Fischer Residence Hall, Size 12 and Ready to Rock.

ABOUT SIZE 12 AND READY TO ROCK:

Heather Wells used to be a teen pop sensation…until her label dropped her for gaining a few extra pounds, and she walked in on her boy-band boyfriend Jordan Cartwright banging her pint-sized popstar replacement, Tania Trace. In the aftermath of this debacle, the last thing Heather expected were the plus-sized sparks that flared with Jordan’s big brother, Cooper.

But now that Heather and Cooper are ready to tie the knot, she’s determined to keep her new job at New York College’s aptly-nicknamed “Death Dorm” from throwing a wrench (and the many other deadly little surprises it’s thrown in the past) into her happily-ever-after plans. (Maybe not the “ever after” – Heather and Cooper have learned to take the words “until death do us part” very seriously!)

Now, in SIZE 12 AND READY TO ROCK, it’s summer break and the campus is quiet. But that doesn’t mean Heather can relax…because that ambulance she just saw pulling up in front of Death Dorm is there for none other than Tania Trace, now married to – and pregnant by – Heather’s ex…who just happens to be covered in his wife’s bodyguard’s blood.

Just another day at Death Dorm – or has America’s hottest couple got a deadly secret? Soon Heather’s dodging photo-hungry paparazzi and squealing fourteen and fifteen year-old pop star protégés after the first-ever Tania Trace Rock Camp – with its own reality film crew – checks into the dorm. But when one of the producers of Tania’s reality show checks out – on a gurney – it’s clear murder wasn’t taking the summer off.

Can Heather get estranged brothers Cooper and Jordan to bury the hatchet – before someone buries it into Cartwright Record’s biggest star? If the “reality” is that saving Tania’s life is what it takes to get her ex out of her life – and Cooper firmly into it, once and for all – Heather Wells is ready to rock, roll, and right some grievous wrongs!