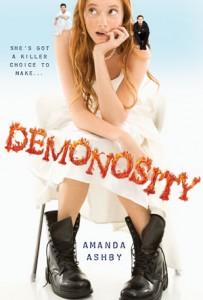 It’s time for another Guest Star! Our guest this week is Amanda Ashby, author of the new release, DEMONOSITY! And to celebrate her release, I’m giving away a free copy! (See widget at the bottom of this post!)

The Black Rose–a powerful ancient force–has been let loose and has taken up residence in Celeste Gibson, popular girl at Cassidy Carter-Lewis’ high school. Thomas Delacroix is the spirit of a fourteenth-century knight who is devoted to protecting the Black Rose, but he needs a contemporary living being to take on the challenge. That’s where Cassidy comes in.

She’s a quirky high school junior who just wants to dress in her vintage clothes, hang out with her best friend, and take care of her father, who is recovering from surgery. She’s the last person who would ever volunteer for such a task, but no one actually asked her.  Now, like it or not, she finds herself training before dawn and battling demons at parties, the mall, and even at school. But hey, no one ever said high school was going to be easy.

In honor of UNREMEMBERED, I’m asking all my guest stars to tell us about a memory they wish they could “Unremember.” Here’s what Amanda had to say! 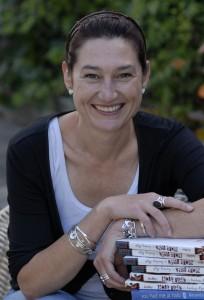 I’m a big fan of memory wiping (and mind control. You have no idea what I could do if I was a Jedi). Anyway, I know I should say that I’d unremember something deep and dark from my hideous teenage years but truly, I don’t want you to think badly of me (plus I’ve been advised that suppression is the best form of mental health!) so I think I’d better just leave my embarrassing past where it is!

However, the one thing that I would love to erase from my mind is season two of Dark Angel. I know it was a long time ago but I seriously, seriously, SERIOUSLY loved season one of that show and then something unexplainable happened and season two was awful – so awful that not even a hottie like Jensen Ackles could save it. So, Jessica, since you are the master of making things happen, I will looking forward to forgetting about this is the near future!

“With interesting characters and a fresh plot, this absorbing read addresses everything from peer pressure to intelligent guy pals to self-reliance, with just enough paranormal activity to maintain an edge. The message never overwhelms the fun in this frothy paranormal romp.” Kirkus Reviews

Amanda Ashby was born in Australia and after spending the last sixteen years dividing her time between England and New Zealand, she’s finally returned home for some sunshine. When she’s not moving country, she likes to write books (okay, she also likes to eat chocolate, watch television and sit around doing not much, but let’s just keep that amongst ourselves, shall we?)

She has a degree in English and Journalism from the University of Queensland and is married with two children. Her debut book, You Had Me at Halo was nominated for a Romantic Times Reviewer’s Choice award. Zombie Queen of Newbury High was listed by the New York Public Library’s Stuff for the Teen Age 2010. Fairy Bad Day was selected by Voya as one of their Top Shelf Fiction for Middle School Readers 2012 and was a SCBWI Crystal Kite Award finalist for the Australia/NZ region.

Visit her online at: AmandaAshby.com