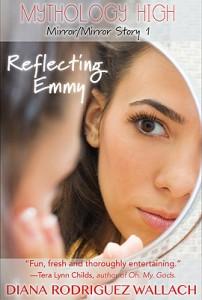 It’s time for another Guest Star! Our guest this week is Diana Rodriguez Wallach, author of the new release, Reflecting Emmy!

Background About Reflecting Emmy and the Mirror, Mirror Trilogy:

Diana Rodriguez Wallach, author of the award-winning YA series Amor and Summer Secrets, has created a modern take on the myths of Narcissus and Nemesis in a contemporary teen setting.

Her Mirror, Mirror trilogy debuts September 3rd with “Reflecting Emmy,” followed by “Nara Gazing” in October, and “Shattering GiGi” in November. Each title will be a $0.99 short story sold in digital ebook format for Kindle, nook, and kobo. The titles will be combined to create the complete Mirror, Mirror trilogy, along with bonus materials and a prequel short story, in December 2013.

In early 2014, Diana’s Mirror, Mirror trilogy will be combined with the works of YA authors Jammie Kern and Magda Knight to create the Mythology High anthology, available in ebook and paperback through Buzz Books.

Eighteen-year-old Emmy is in the family business-trapping vapid narcissistic souls into her silver compact mirror for all eternity. It’s what the Rhamnusia family has been doing for thousands of years, all under the direction of Great Grandmother. Only Emmy’s latest assignment, Nara, is about to prove more challenging than she ever expected.

Gorgeous and self-absorbed, Nara is unflinchingly cruel to her classmates. Even her boyfriend, Luke, can no longer tolerate her actions–much to Emmy’s relief since she finds Luke a little more than intriguing. But when Emmy tricks Nara into gazing into her mystical mirror, what she finds there is not what she’s expecting.

In honor of UNREMEMBERED, I’m asking all my guest stars to tell us about a memory they wish they could “Unremember.” Here’s what Diana had to say! 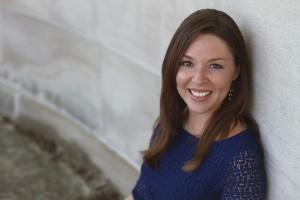 When Jessica asked me to come up with a time in my life I’d like to “unremember,” I’ll be honest, my first reaction was panic. I don’t really have a good humiliation story—I never dropped my tray in the cafeteria, I never puked during a school play. That’s not to say embarrassing things haven’t happened to me, but most were in college and involved alcohol, thus making them a bit a fuzzy and “unremembered” as it is.

So I turned to my husband for help. What would be a good story I’d want to forget?

This is why I married him, folks. So I bring you, the Ikea story.

If you haven’t seen the 30 Rock episode where Tina Fey (a local girl from my hometown in Delaware County, PA) talks about the amount of relationships that end at the Elizabeth, NJ Ikea, outside of Manhattan, please take a minute and watch the clip now.  Go ahead, I’ll wait:

My girl Tina wasn’t kidding. Shopping at Ikea is the worst. And particularly, that Ikea.

My husband and I had just graduated from college and moved to Manhattan with shockingly little money. And where do poor recent grads go to purchase their first bedroom set? Ikea. If you’ve ever seen the movie Office Space, we purchased the exact set that Peter Gibbons sleeps on, down to the lamp on his bedside table. It’s a total coincidence, but I still love pointing it out.

Only we had to buy that bedroom set before it could grace our tiny apartment—a two bedroom in Times Square that housed four people and was so small that we all couldn’t sit in the living room and watch TV at the same time, so one of us had to sit on a stool in the kitchen.

We went to Ikea with our roommates, borrowing a car from my now husband’s brother.

The place was mobbed. And this is coming from a girl who lived in Times Square at the time. Trust me, the store looked like that ‘99 Woodstock recreation where people rioted and lit the stage on fire. Within minutes of getting there, I got a headache. Now, I’m prone to headaches and even I have to admit that when they hit I can become borderline nonfunctioning at worst and just outright bitchy at best. (See, I know my flaws).

So my now-husband immediately becomes nervous like he’s the guy from the Hurt Locker who knows he only has a few moments before this bomb goes off. We eventually make our way through the mob and down to the warehouse to locate the bedroom set we picked out. Only it wasn’t in stock. And we looked for a long time.

So we pick out another set, and that one was missing the end tables.

Then we pick another. And another.

Finally, my fuse it about to ignite and out of pure desperation we buy the only set that has all of its pieces in stock (hence, the Office Space set). We prepare to shove it into the tiny hatchback of our borrowed Saab when our roommates leave us, so hungover they’re vomiting in the Ikea bathroom. So my now-husband and I poorly, tie the mattress to the roof, and get on our way thinking, “Whew, that was close, but we made it.”

Then the car breaks down. I’m not kidding.

We are on the highway, just past the exit leaving the store, so close we are staring at the Ikea parking lot, yet completely stranded on the shoulder of the very busy NJ Turnpike.

I’m just gonna be honest here, I lost it. Full out lost it. My head was pounding, I was starving, we had a stupid bedroom set strapped to our car that we didn’t even want, and now we were stuck on the side of a road hoping one of his brothers would answer their phone and come pick us up. From Manhattan. In traffic.

We were there a LONG time. I don’t know how long exactly, but I think the seasons changed. I threatened to walk back to Ikea, on a death-spiral of an exit ramp, just to buy myself some Sweedish meatballs and beg assistance from a mall cop. All the while, my insanely patient boyfriend is staring at me, a girl he’s known since he was sixteen years old, and thinking, “This is it. I’m dating a lunatic. How did I not see this before?”

Eventually one of his brothers picked us up. It was dark. We hauled our furniture up to our 36th floor apartment and I fell asleep on the mattress in our tiny living room while it was still in the plastic wrapping and before anyone could even allen-wrench a single piece of furniture.

For some unknown reason, my husband didn’t dump me. We got past it, figuring if we could survive Ikea, we could survive anything. And every time we drive to Manhattan and zoom past that Ikea, we look at that little ominous stretch of road off the exit ramp and think, “This is where it all happened. The scene of crime.” I’ll never live it down. And if my husband and I could both “unremember” it, I think we’d take you up on your offer.

What People are Saying about Reflecting Emmy:

“A fun, fresh and thoroughly entertaining modern twist on the Narcissus myth. Readers will love Emmy and her (mis)adventures. Wallach packs a lot of story into a small packing–romance, friendship and the power of one person to make a difference. The only thing missing… is more!”~ Tera Lynn Childs, award-winning author of Oh. My. Gods., Forgive My Fins, and Sweet Venom.

“Diana Rodriguez Wallach’s Mythology High is too much fun. Emmy collects narcissistic souls for the family business but after making one tiny little mistake she finds her life turned upside down. These three stories are a must for anyone who loves Greek mythology, feisty heroines and second chances. My only complaint is that I didn’t want them to finish.” –Amanda Ashby, author of Fairy Bad Day and Demosity

Diana Rodriguez Wallach is the author of Mirror, Mirror, a short-story collection based on the Narcissus myth, that includes Reflecting Emmy, Nara Gazing, and Shattering GiGi (Buzz Books 2013). She is also the author of three award-winning YA novels: Amor and Summer Secrets, Amigas and School Scandals, and Adios to All The Drama (Kensington Books).

In 2011, she published a highly regarded essay in Dear Bully: 70 Authors Tell Their Stories (HarperCollins), and in 2013, she will be featured in the anthology Latina Authors and Their Muses (Twilight Times Books). In 2010 Diana was named one of the Top Ten New Latino Authors to Watch by LatinoStories.com, and she placed second in the International Latino Book Awards. She hold a B.S. in Journalism from Boston University, and currently lives in Philadelphia with her husband and daughter.

Visit her online at: DianaRodriguezWallach.com