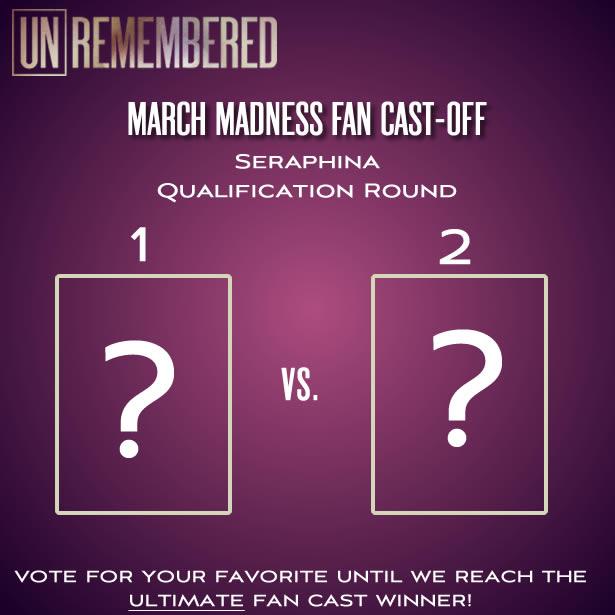 It’s March Madness everyone! And you know what that means? (Well, at least I hope you do, cause I don’t really know much about it.)

But instead of pitting basketball teams against each other, I’m pitting fan casts! That’s right! I was OVERWHELMED by all the fans that submitted dream casts for Unremembered last month and so I thought we’d do a friendly competition to pick the fan favorite actor/actress for the roles of Seraphina, Zen, and Cody!

So, how do you play?

It’s easy! Simply follow me on Instagram, Twitter, Tumblr, or Facebook. (Or just follow the hashtag #UnrememberedFanCast on any of those) and every day I’ll be posting rounds. You vote on which actor/actress you like best from each round (by commenting or replying) and the winners of that round will go on to the next round. And so on and so forth, until we have ONE first place winner for each role!

We’ll be starting with 16 fan cast picks for each role and we’ll be voting and whittling them down until there’s only one left standing.

The first games have already been posted! So go see, vote, and have fun!

*NOTE: All of these actors/actresses have been chosen by readers and fans of the Unremembered trilogy. I had no part in the selection of the contestants.

DISCOVER THE SECRET STORYTELLING CODE BEHIND EVER BESTSELLING NOVEL

Sign up to instantly receive a FREE Save the Cat! Starter Kit including:
We respect your email privacy.