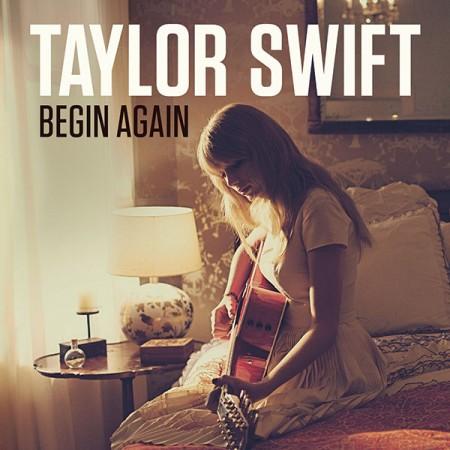 Taylor Swift. Whether you love her or hate her, you have to admit, she’s taken the world by storm. To be blunt, she’s popular. VERY popular. She’s sold 22 million albums, and 50 million downloads of her songs worldwide and her last three released songs shot straight to the top of the iTunes bestseller chart.

But the big question here is why? Why is she so popular? Why does she capture so many hearts? In my opinion, it’s because her songs resonate. With people of all ages. Which brings us back to the question of why?

Could it possibly be that Taylor Swift’s songs follow the same 3-act, 15 beat structure that the Blake Snyder Beat Sheet teaches us is the key to capturing audiences?

Well, to answer that question, I invite you to take a listen to Taylor Swift’s latest release, Begin Again, and read my analysis of the song using the Blake Snyder Beat Sheet.

If you’re not familiar with the song, watch the video below:

The song opens with the lyric: Took a deep breath in the mirror. He didn’t like it when I wore high heels, but I do.

This is a very visual opening (as Opening Images should be!) We can just picture Taylor standing in front of her mirror (in her high heels) trying to psych herself up for a first date with a new guy, but still haunted by the ghost of her ex who criticized things that she wore. In this brief 10 seconds we completely understand who the hero (Taylor) is at the opening of this song/story: A girl who’s trying to move on from a past relationship that has scarred her.

Turn the lock and put my headphones on. He always said he didn’t get this song, but I do. I do.

This lyric, along with the Opening Image creates our set-up.

As all good set-ups should do, we see the hero in her “before” world (the thesis world), which is the status quo of her life before the journey/story begins. The lyrics clearly show us what this world looks like: Taylor is still plagued by her failed relationship and still hanging onto “his” judgments of who she is, what she wears, and what she likes. And by him not “getting” the music she likes, he, by extension, doesn’t “get” her.

However, the defiance of lyric, “but I do” and the fact that she’s purposefully listening to a song he didn’t get, also tells us that she’s ready to move on. Although, she may still be hung up on the memory of “him,” she’s clearly starting to embrace who she is without him. Which is probably why she repeats it. “I do.”

The music of this opening sequence is very soft and tentative (no drums, just guitar), which reveals to us exactly who Taylor is at the start of this journey… tentative.

She wants to move on. But will she? That’s the question this song will answer.

Walked in expecting you’d be late but you got here early and you stand and wave. I walk to you.

The music really picks up at second :35, drums come in along with more instrumentation, representing the change that’s about to happen to our hero.

Taylor arrives at the café where she’s meeting the new guy, addressed in the song simply as “You.” (As opposed to “him,” the ex). She expects the new guy to be late (another remnant of her old world and old-world thinking) but he’s actually early and waiting for her which surprises her. Her life is about to change. And it all starts here: when she meets “you.”

You pull my chair out and help me in. And you don’t know how nice that is. But I do.

CHORUS: And you throw your head back laughing like a little kid. I think it’s strange that you think I’m funny cause he never did.

This is the section of the song where Taylor is debating how she feels about the new guy. And how he might actually change everything, which she clearly wasn’t expecting based on the opening lyrics. She’s met him; he’s surprised her. He’s nicer than she expected, he laughs at her jokes but is it really enough to wipe away the pain and doubt left behind by her last relationship? We’ll see.

I’ve been spending the last 8 months, thinking all love ever does is break and burn and end. But on a Wednesday, in a café, I watched it begin again.

The theme of this song is starting over. Picking up the pieces of your life and learning to love again after someone has broken your heart. (You don’t get much more universal than that!) And this “theme” is repeated at the end of every chorus. In fact, it’s in the title of the song. “Begin Again.” How appropriate.

But you’ll see how with each repeat of the chorus, the hero’s view of the theme changes ever so slightly based on her progressing transformation.

At minute 1:36, we break into the second verse. Or in Blake terms, the “upside-down world.” The “antithesis.” In the world of this song, the antithesis is Taylor on her date with the new guy (who is also the B Story, the character who will eventually teach her about the theme). After the catalyst, she hasn’t run out. She hasn’t bailed. She’s stuck it out and is willing to see where this goes.

In the BS2, the 2nd act should always be an extreme opposite of the first act and Taylor’s new song captures that perfectly as we see her starting to open up, letting someone else in, enjoying another guy’s company. She’s leaving that heartbroken version of her that we saw in the mirror behind and entering a new, unknown place.

You said you never met one girl who has many James Taylor records as you, but I do.

With this lyric, we get a small glimpse of the “fun” that Taylor and the new guy are having on their date. Staying true to the spirit of the “Fun and Games” section, this flirty, lighter lyric is a nice break from the heavier heartbreak of the first verse. Things seem to be off to a good start.

We tell stories and you don’t know why, I’m coming off a little shy, but I do.

We’ve reached the middle of the song and all seems to going great with Taylor and her date. This is a “false victory” however because has she really learned the theme? Has she really let go of the past and is she 100% ready to start over? No. And she even admits it to herself here. She says she knows why she’s coming off shy. It’s because she’s still attached to the past and her old way of thinking. She’s still not completely over her ex and ready to move on. Taylor admittedly still has some growing to do.

CHORUS: But you throw your head back laughing like a little kid. I think it’s strange that you think I’m funny cause he never did. I’ve been spending the last 8 months, thinking all love ever does is break and burn and end. But on a Wednesday, in a café, I watched it begin again.

A repeat of the chorus and our theme reminds us that our hero, Taylor, is still battling with the demons of her past. Which is why she makes one crucial lyric change from the first chorus. She uses “but” instead of “and,” at the beginning, reminding us and her that she’s still conflicted. The “but” is in direct contrast to her last lyric about still being shy. She’s literally having an internal debate about what to do.

But it’s almost time to prove once and for all whether she’s changed or not. Whether her transformation is complete. And this is when we move into the bridge of the song.

And we walk down the block to my car and I almost brought him up.

She’s now left the café with the new guy. The date is coming to an end. And this is when Taylor reaches her lowest point.

She almost brings up the ghost of her past. The ex. “Him.” Which could possibly ruin her chances with this great new guy. And which would prove to her and the new guy that she’s not fully over “him” and not ready to move on.

But you stopped to talk about the movies that your family watches every single Christmas. And I won’t talk about that. For the first time, what’s past is past.

But then, right as she’s about to crumble and collapse, the new guy (B-Story character!) talks about his family, reminding Taylor of what a great guy he is. And how unlike “him” he is.

And just as all great heroes do when they break into act 3, she has an epiphany. Family is very important to Taylor and by him talking about his family, she realizes that THIS is a guy worth moving on with. The truth comes ringing loud and clear which is why she decides to not to talk about the “wrong guy” and potentially ruin her chances with the “right guy.”

Thanks to her help from the B-Story character (the new guy), she’s proven she’s finally learned the theme. She knows how to let go of the past and begin again. Which is why she says, “For the first time, what’s past is past.”

This is a new discovery for her. But it’s exactly what she needed to learn.

CHORUS: Cause you throw your head back laughing like a little kid. I think it’s strange that you think I’m funny cause he never did. I’ve been spending the last 8 months, thinking all love ever does is break and burn and end. But on a Wednesday, in a café, I watched it begin again.

Notice again, the one-word lyrical change to this chorus. She uses “cause” instead of “but” or “and.” She’s no longer internally debating. Her demons are gone. She’s learned the theme, she’s ready to begin again and instead of the chorus being a contradiction to what she’s feeling, it’s become a “reason” for what she’s feeling.

She’s learned to how to let go and begin again because of this guy and how great he is.

This is her final image: being with the new guy, having let go of her past, and being confident and sure of herself. Now, we’re able to end the song knowing that Taylor’s transformation is complete.

And that’s why she ends the song with a repeat of, But on a Wednesday, in a cafe, I watched it begin again.

Filed under: Save the Cat Tips for Writers