A WEEK OF MONDAYS – Cover Reveal, Excerpt, and ARC Giveaway!

I’ve been waiting SO LONG for this day and now it’s here! I finally have permission to share with you the super amazing awesome-sauce cover for A WEEK OF MONDAYS, designed by the insanely talented Elizabeth Clark! I honestly think this cover absolutely nails the spirit, voice, and humor of the book while also telling you a little bit about the story. In fact, it might just be one of my favorite covers ever!

So, to celebrate the reveal, I’ve decided to share with you a little sneak peek excerpt from the book (the first EVER sneak peek to be released)! Plus, I’ve also decided to do … (drum roll please)….

That’s right! THREE autographed advance copies of A WEEK OF MONDAYS will go to 3 lucky winners a whole NINE months before the book releases to the public! (Details below!)

So without further ado, here’s the fantastic cover and a description of the book! What do you think??? 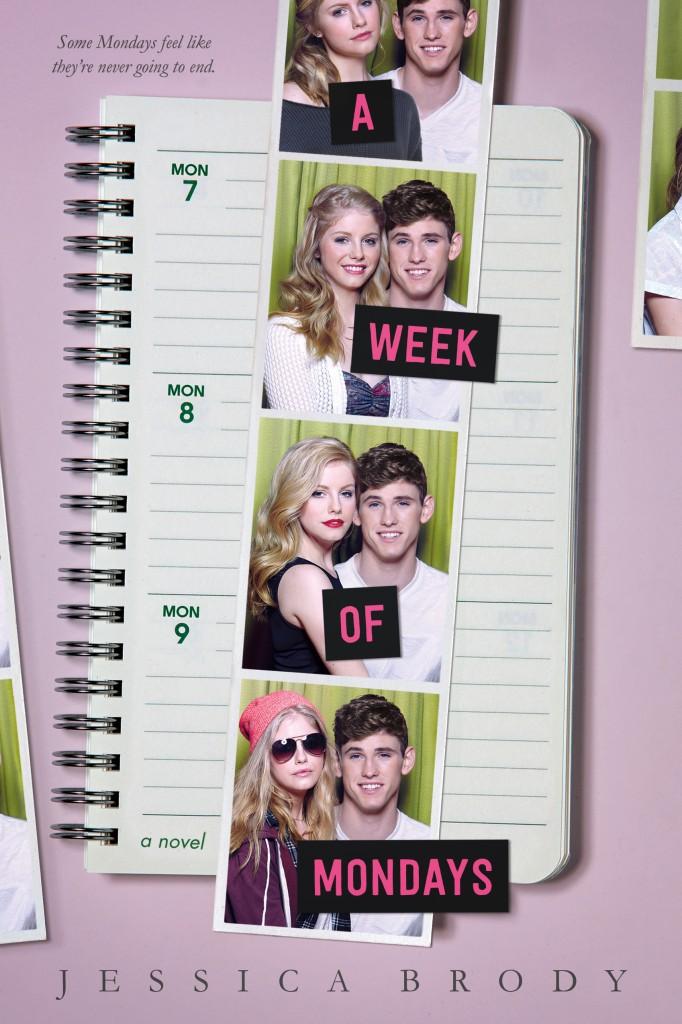 When I made the wish, I just wanted a do-over. Another chance to make things right. I never, in a million years, thought it might actually come true…

Sixteen-year-old Ellison Sparks is having a serious case of the Mondays. She gets a ticket for running a red light, she manages to take the world’s worst school picture, she bombs softball try-outs and her class election speech (note to self: never trust a cheerleader when she swears there are no nuts in her bake-sale banana bread), and to top it all off, Tristan, her gorgeous rocker boyfriend suddenly dumps her. For no good reason!

As far as Mondays go, it doesn’t get much worse than this. And Ellie is positive that if she could just do it all over again, she would get it right. So when she wakes up the next morning to find she’s reliving the exact same day, she knows what she has to do: stop her boyfriend from breaking up with her. But it seems no matter how many do-overs she gets or how hard Ellie tries to repair her relationship, Tristan always seems bent set on ending it. Will Ellie ever figure out how to fix this broken day? Or will she be stuck in this nightmare of a Monday forever?

From the author 52 Reasons to Hate My Father and The Unremembered trilogy comes a hilarious and heartwarming story about second (and third and fourth and fifth) chances. Because sometimes it takes a whole week of Mondays to figure out what you really want.

Exclusive Excerpt from A WEEK OF MONDAYS!

(From the Second Monday)

I sit down on the bed. “Owen, if I tell you something will you promise to believe everything I say?”

He looks skeptical. “Is this a trick question? Are you going to tell me you formed your own cult and now I’m going to be stuck joining it because of this promise?”

He sits, pulls Hippo, my stuffed hippopotamus, onto his lap, faces him toward me, and raises Hippo’s left leg in the air, like he’s being sworn in. “Okay, fine. We promise to believe you.”

I look down at Hippo’s beady black eyes, then up at Owen’s inquisitive green ones.

“Something weird happened to me today. I think I might be stuck in the same day.”

He lets out a groan and turns Hippo around so they can share a look of disbelief. “This again?”

“You promised to believe me. You both did.”

He and Hippo exchange another glance. “That’s before we knew you were, you know—” he spins his finger next to his ear and whispers—“craaaazy.”

“Ah, yes, the moment of proof. This is where you tell me some deep, dark secret that I just happened to have divulged to you on a different version of this same day.”

“Last night you had a dream that you went skinny dipping with Principal Yates in the school pool.”

Owen’s mouth literally falls open. I think this is the first time he’s ever been stunned into silence.

“You mean like that?” I ask, struggling to hide a triumphant smile. The shock on his face is too priceless. I would take a picture but I can’t be certain it would be on my phone in the morning.

“You told me about it. Last night.”

“I most certainly did not. Besides, I just had the dream last night.”

“You mean Tristan broke up with you twice?”

The reminder is like a knife into my heart. I swallow. “Yes.”

“And we’ve had this conversation before?”

“Well not this same conversation but similar. Some details have been changed.”

He crosses his arms and rests them on Hippo’s head. “Like what?”

“Like last night, you tried to cheer me up by insisting I rename Hippo.”

“He does deserve a real name.”

“Alternate me is one smart guy.”

“Then I said that he does have a real name, and you said—”

“Hold up. Calling something by its literal genus is not a real name.”

I laugh. “Exactly. That’s exactly what you said.”

This giveaway is international!

3 Autographed ARCs are up for grabs! Winners will receive their ARCs in October (when they’re printed), which is more than 9 months before the release of the book!

Use the widget below to enter!