I Still Side with Hope 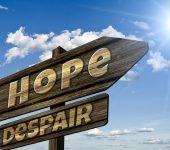 Anyone who knows me knows I am an eternal optimist. On the night of the election, I tweeted, “I side with hope.” And I meant it. I’d always rather deal with disappointment later, then live without hope now. Which is why, like so many people, I never, in a million years, believed that America would elect Donald Trump as President. I had faith that the people of this country wouldn’t let that happen. Yesterday, that faith was broken. And so was my unwavering optimism about life.

They say there are five stages of grief: Denial, Anger, Bargaining, Depression and Acceptance. Yesterday, I experienced all of them. I shook my head in disbelief and shock, convinced there had to be a mistake and if I just waited long enough, it would be found and it would be fixed. Then I just got mad. How could this happen? How could we let this happen? How could someone like this ever become President? Then I tried to negotiate with myself. Maybe it won’t be that bad. Maybe the media has blown it all out of proportion. After all, he’s been lying this whole time, why should we believe he’ll actually do anything he’s said he would do? Then I fell into a deep depression. It felt like the worst break-up in history, and everyone was experiencing it at once. I felt physically ill.

Whenever this happens, whenever I feel hopeless and helpless and alone, I look to what I know for guidance. I look to the one thing that has gotten me through so many of my darkest moments: Storytelling.

All great stories are about a flawed and broken hero who doesn’t know they’re flawed and broken. Through the vehicle of story, these flawed heroes experience a personal transformation, remaking them into something better. Something a little less flawed and a little more whole. But before they can do that, they have to go through the part of the story that I refer to as the Dark Night of the Soul. It’s a place where all hope is lost and helplessness reigns king. It’s a place where dark thoughts and despair become the new norm. But most important, it’s a place where the hero searches into their heart and soul, digs deep, deep down, and discovers (and eventually accepts) their own brokenness. It’s the moment the hero finally, finally admits to those flaws and faces those demons. And not until then, can they break out of their Dark Night of the Soul and start on their path to healing. Not until then, can they emerge as the improved and bettered version of themselves and prove they are worthy of being the hero of this story.

When I look at our situation through this lens, it brings me solace. This is our story, America. We, as a country, are a flawed and broken hero. And this beginning of our Dark Night of the Soul, is our time to reflect on that. The shield has been lifted from so many of our eyes. For some, those who deal with racism, bigotry, intolerance, sexism, and isolation every day, the shield was never there to begin with. But now, for the rest of us—people like me who had that undying faith, who never believed this could happen to us, who refused to accept that those demons existed—now we’re with you. Now we know. Now we, as a country, can take that closer look inside ourselves and discover what it’s going to take to emerge from this as the heroes we want to be. The heroes we know we can be.

No one can say how long this Dark Night of the Soul will last. No one can say how long it will take for us as a country to recover. But I believe that this election was our first step. Now we just have to figure out how we’re going to move forward. How we’re going to heal these wounds that evidently have already been there, but that, for some of us, have just started to come into the light.

During my stage of depression last night, when I was inconsolable, in tears, feeling hopeless about our future and helpless to do anything to help, my husband, in all of his calm, Zen wisdom asked me, “What about this situation bothers you the most?”

I couldn’t answer. I told him everything about it bothers me. The injustice. The intolerance. The antiquated electoral system that allowed this to happen. The uncertainty it brought to the world. The fear it’s caused in so many people. The way other countries now see us. The voice it gave to hatred. The list went on and on.

When I was done ranting, my husband advised me to search my heart and try to pinpoint the biggest source of my pain and grief, because that’s where my own healing energy is needed the most right now. That’s where I should look for opportunities to help.

Today, I start that process. I start trying to pinpoint my biggest source of grief and looking for ways to heal it. Whether that’s volunteering, getting more involved in communities, writing letters or blog posts, I don’t yet know. But I’m determined to find it.

To me, it’s as basic as basic math.

We start small. We do what we can. We tackle one grief at a time. But if we all did that, imagine how much less grief there would be?

That’s how I, personally, need to think about the challenges ahead of us. If I start thinking about getting through the next four years, if I start thinking about everything that’s wrong with this country, I feel overwhelmed. I feel alone. And I don’t even want to start. But if I think about what I can do today, and tomorrow, and even the next day, I feel empowered. I feel hopeful again.

Because I believe that, together, we’ll get through this. One chapter at a time.