A Week of Mondays – Deleted Prologue 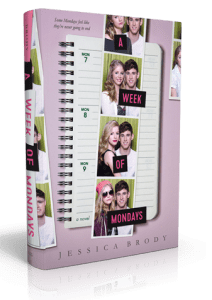 Not every scene makes it into the final book. Here’s a never-before-released prologue that I wrote for A WEEK OF MONDAYS that was deemed “entertaining, but not necessary.” It was definitely a darling that I had to cut but the book was already long and my editor and I both agreed that it wasn’t completely necessary and didn’t do much to further the plot. So out it went. But I’m posting it here on my blog for anyone who wants to read it!

Everyone knows that Mondays are the armpit of the week. This is not a radical new idea. It’s pretty much common knowledge. Mondays are like the dentist appointment that everyone has to suffer through but no one enjoys. And if anyone tries to tell you that they actually like Mondays—or dentist appointments, for that matter—then you should just run the other way. Because this person is either a compulsive liar or mentally unstable. And who needs that in their life?

There’s a reason so many famous songs are written about Mondays. Not Tuesdays. Not Thursdays. Not even an occasional love ballad to a Saturday. Nope. it’s all about the Mondays.

In the eighties, the Bangles called it a “Manic Monday.”

In the seventies, the Boomtown Rats declared quite plainly, “I Don’t Like Mondays.”

But I think the Mamas and the Papas said it best in their famous 1966 song, “Monday Monday.”

And you know, I really should have listened. I should have heeded Big Mama Cass’s sage advice. Never, under any circumstances should you ever trust a Monday. Just like you should never trust a cheerleader when she promises there are no nuts in her bake sale cookies. (But I’ll get to that later.)

But I didn’t listen. I didn’t heed this advice.

So, alas, there I was on that fateful Monday morning in mid September. I was naïve. I was idealistic. I awoke feeling…hopeful, of all things.

I was an idiot.

In my defense, though, even the Mamas and Papas song starts off fairly optimistic.

“Monday, Monday. So good to me.

Monday morning, it was all I hoped it would be.”

Of course, then the song—and the day—pretty much takes a turn for the worst. Just as mine did.

Sorry, Bangles. But your Manic Monday has nothing on mine.

In fact, my manic Monday makes yours look like a blissful Saturday in the park.

Oh, Monday, Monday. You most definitely can’t trust that day.

Read more about A WEEK OF MONDAYS here!

Filed under: Behind the Book Tips for Writers Writing Mastery