Four Catalyst Quick Fixes for Save the Cat! 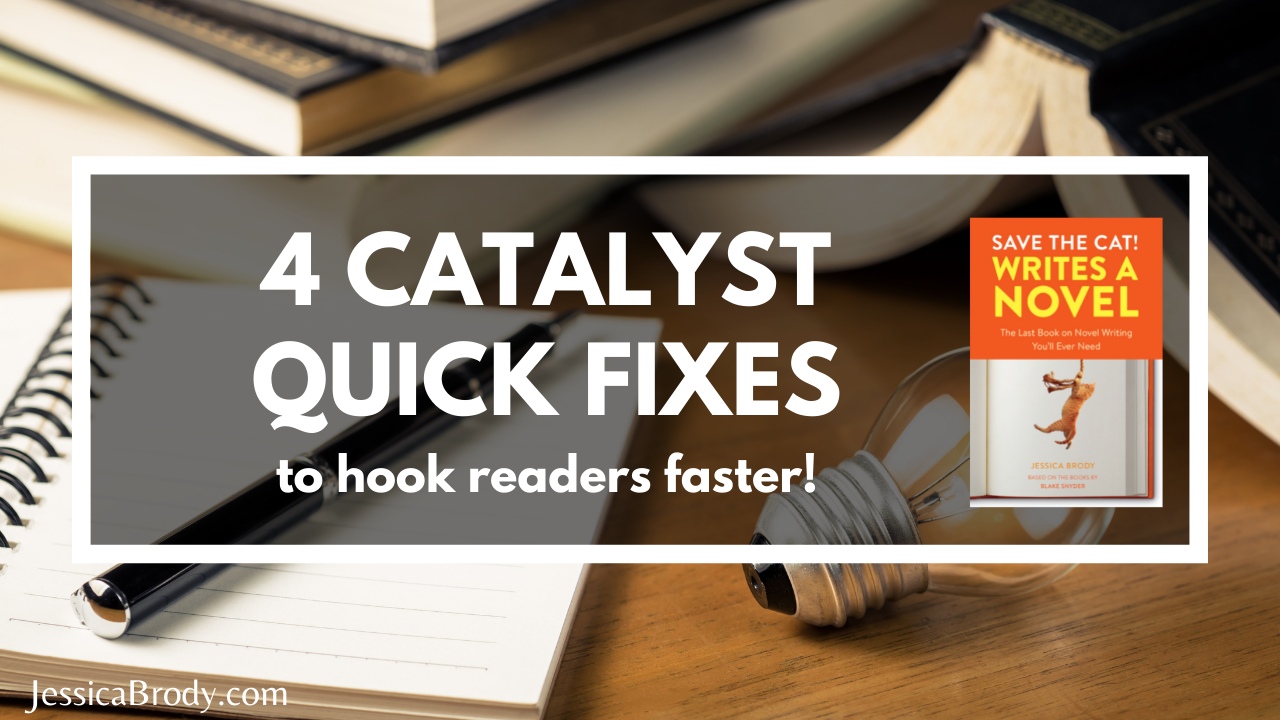 So, here’s the problem: If you’ve read Save the Cat! Writes a Novel or taken my Save the Cat! Novel Writing Online Course, you know that the Catalyst (literally defined as the moment your story finally gets “going”) doesn’t come until 10% of the way in. So, mathematically speaking, if you have a story that’s 400 pages long that’s 40 pages of…what? Boring status quo Set Up where nothing happens? Let’s hope not!

Or what if you’re writing a story for younger readers who have shorter attention spans and you want to get the plot moving sooner? Even as soon as, say, Page 1? (This is the case in Because of Winn Dixie by Kate DiCamillo where the Catalyst–the meeting of Winn Dixie–literally comes in the first chapter as is alluded to in the first sentence!)

Whatever the case may be, there are definitely story scenarios that warrant something big to happen sooner than the 10% mark.

So what do you do? Well, the way I see it, you have a few options. And that’s what this Writing Mastery Tip is all about.

Introducing my four Catalyst Quick Fixes! These are all strategies that you can use to pull the reader into your story faster and ensure they don’t give up before you even get to Act 2!

You can cryptically allude to the Catalyst earlier in the story, like perhaps in a Prologue.  In other words, you reference a “big event” that’s going to completely change the hero’s world, but don’t actually spell out what it is until the actual event arrives. You might give them hints like, “Before the phone call came, I was a different person…” or “I’ll never forget the night the man in the trench coat knocked on my door and handed me the key.”

The “pull” of this tactic is the reader’s desire to find out what this “big event” is that you’ve alluded to and try to guess what it is, in reference to the rest of the Set Up, before you actually reveal the answer.

Take a look at the first chapter of The Kite Runner by Khaled Hosseini as a great example. I also employed this tactic in the small half-page prologue of The Geography of Lost Things, which starts with the line, “By the time the messenger arrived at our front door, Jackson had already been dead two weeks.” What did the messenger bring? Who is Jackson? Well, the Catalyst will soon reveal all, but before that, I narrate all the events that happened before the messenger arrives, which ultimately serves as my Set Up beat.

You can start the story with the Catalyst. I.e. drop it on the reader like a teaser (rhyme unintentional) and then back up in time and tell the story leading up to it. Usually, in this scenario, you give the reader more information and a better idea of what the Catalyst is (as opposed to Quick Fix #1, when you only cryptically allude to it), but you leave out key bits of information (like how the Catalyst came to be, or how it ultimately turns out.)

The “pull” of this tactic is the withholding of those key bits of information. You’ve piqued the reader’s interest with a semi-complete picture of this future event, and now they want to find out exactly how it plays out.

Check out Ready Player One by Ernest Cline to see this strategy in action. I also do this in my book, Unforgotten (the sequel to Unremembered), which starts with my hero burning at the stake. Why? And how does she get out of it? Well, that comes later.

Dropping subtle hints about an upcoming Catalyst is another effective way to keep your reader engaged until the actual Catalyst arrives. These should be hints that the reader notices but the hero doesn’t. Or if they do, they ignore them.

I employed this tactic in my young adult novel In Some Other Life, which actually has a very late Catalyst. It doesn’t come until page 48 of a 450-page novel. In this story, the Catalyst is when Kennedy walks in on her boyfriend, Austin, kissing her best friend, Laney, (and then discovers they’ve actually been cheating on her for a while). It’s a huge shock to her, but savvy readers, I’m sure, are able to pick up on the clues I dropped. Like the fact that Austin has way more in common with Laney than Kennedy does. Or the fact that both Austin and Laney went to the same coffee shop that morning, but claim to not have seen each other. Or the moment when Kennedy suggests that Laney and Austin watch a TV show together while she’s at an event with her parents, Laney protests just a tad too much. The idea is that readers will start to theorize about the Catalyst to come and keep reading to see if they were right.

And finally, my favorite tactic to solve all your Catalyst troubles. It’s called the Double Bump. This is when you effectively have two (or more than two!) Catalysts, each serving to move the hero a bit closer to Act 2.

Because I enjoy writing long, luxurious Set Ups, I end up employing this tactic a lot. Like in my novel 52 Reasons to Hate My Father. The Catalyst comes on page 38, when spoiled heiress Lexington Larrabee is told she won’t be receiving her trust fund of $25 million until she completes 52 low-wage weekly jobs. But because I feared readers might not be willing to read that far, I put in a mini Catalyst on the first page, where Lexington Larrabee has just crashed her $500,000 Mercedes convertible into a convenience store on Sunset Blvd. That’s the event that kicks off the story. And I use the aftermath of that to do all of my Set Up work (i.e. show how Lexi lives, how spoiled she is, who her friends are, how fraught her relationship with her father is, etc.) This, ultimately, is the event that inspires her father to make the decision about Lexi’s delayed trust fund, but it’s not the event that actually pushes Lexi to try something new and Break into 2. That will come later, in the form of a second Catalyst.

There’s also another version of the Double Bump: A Catalyst that happens at 10%, and then a second Catalyst that happens closer to the Break into 2. This variation of the Double Bump is used for particularly stubborn heroes who just refuse to take a hint and take action after the first Catalyst and therefore a second “bump” is needed to convince them to do something and finally cross that threshold into Act 2.

If you’re getting feedback from readers or agents or editors that your story is taking too long to “get into” or you, yourself, are feeling like your Set Up beat is a bit of a slog to read, chances are you’re in need of one of these Catalyst Quick Fixes.

Give one a try and see if it doesn’t infuse your story with the extra “bump” it needs.

Want to learn more? Check out my Save the Cat! Online Novel Writing Course