5 Most Common First Draft Problems (and how to fix them) 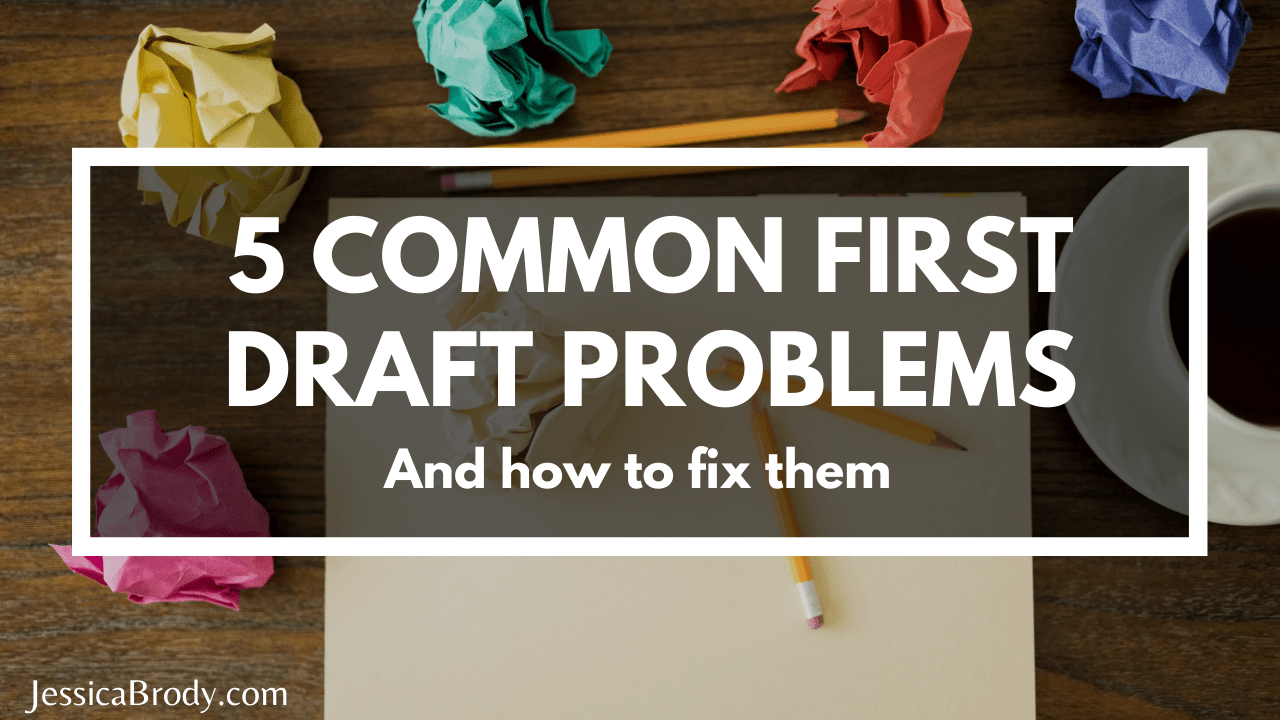 Well, we made it! It’s 2021. 2020 is now officially “history.” And I don’t know about you but 2020 felt like a very messy first draft to me. Full of false starts, random plot twists that made no sense, a hard-to-follow narrative, and very poor pacing.

But although we can’t revise that mess, we can certainly revise the first drafts of our novels and stories and make them shine. So, to kickstart 2021, I’m compiling my list of 5 common first draft problems and how to fix them. For this list, I’m skipping the structural issues and focusing more on the physical writing. If you’d like more of a structure checklist, this blog post should give you a good start!

Now keep in mind, these 5 problems are not things that only newbie writers find in their first drafts. These are problems that nearly all writers are susceptible to. So take comfort. If you’re finding your first draft suffers from many of the items on this list, you are not alone.

1. An imbalance of action and reflection

I find that writers tend to fall into two categories when they write first drafts: those who rely on too much reflection (meaning, internal narrative which can also be called monologuing or info-dumping) and those who rely on too much action (meaning, the characters are all go, go, go, do, do, do, and never take a moment to stop and reflect on what’s going on.) A good novel should have a healthy balance of each.

The best way to tell if one of your scenes or chapters is off-kilter is to go through the chapter and highlight all of the reflection (stuff that happens in your character’s head, which includes description, backstory, or information simply told to the reader by the narrator) in one color (like green) and all of the action (stuff that your characters are actually doing, which includes dialogue) in another color (like red). Then, take a look at your page. Is it a beautiful colorful collage? Or does it look like a thicket of green forest or a swath of impenetrable red lava? This will immediately reveal to you where the imbalances are so you can go about interweaving your action and reflection more evenly in the next draft.

If you’re seeing too much red, make sure you’re adding some time for your characters to reflect on what’s happening before thrusting them into the next stage of the action. This will also give your reader some much-needed breathing room to digest everything that’s going on in the story.

If you’re seeing mostly green, make sure your character is doing something active while they’re having all of these internal reflections to help keep the story moving forward.


In a typical sense, scaffolding is the temporary structure on the outside of a building that’s used by workers while building, repairing, or cleaning. In writing, the scaffolding is all the extra words and description and backstory and information that we writers use when we’re setting up a scene because we’re afraid that without it, the scene will “fall down” and the reader won’t “get it”.

This is when we go on and on for half a page to explain why there’s tension between these two best friends, or to make sure the reader can really picture the bank lobby and everyone in it before the gunman enters, or to describe every movement a character makes while they’re yelling at their co-worker. While we’re drafting, this stuff feels necessary. But in reading back, we often realize that it’s just bloating the scene and slowing the pacing. But we needed it there for ourselves while we were constructing. Like a safety net.

Now, in the revision, is when we have to put every sentence to the test and decide if it really is helping the scene, or if the scene is “stronger without?” (as my editor is fond of writing in the margins of my manuscripts.) If you’re unsure, try deleting sentences or paragraphs from the scene and reading it back through with fresh eyes. Does it feel tighter and more engaging? Or is it confusing? If it’s the former, it can probably go. If it’s the latter, it might be necessary.

Another form of scaffolding (which is so common it deserves its own place on the list) is the overuse of dialogue tags. A dialogue tag is what you place after a piece of dialogue to attribute the dialogue to a character. Like, he said, she shouted, I asked, he demanded. In first drafts, writers tend to overuse these because we’re worried it’s not clear who’s speaking. But too many of them can make the writing feel weighed down and draggy. If it’s obvious who’s speaking from the context you can omit them. Or if you need to clarify the speaker, try varying it up by using action or description instead of a dialogue tag.

LIke, instead of writing, “I don’t want it!” Rebecca shouted.


Try writing, “I don’t want it!” Rebecca kicked at a pebble on the ground.

I can’t tell you how many adverbs my co-author, Joanne Rendell, strikes out of my chapters when we’re working on the System Divine series. I love my adverbs. But, as she explains to me, again and again, they’re lazy. The writing should do the work, not the adverb.

Adverbs are fine for first drafts when you’re just trying to get ideas down on the page and move on to discover the rest of the story. But they can be a killer for reader engagement in finished drafts. And when you rely too heavily on adverbs, you’re missing great opportunities to let your writing, and plotting, and characterization skills shine.

For instance, if you have to use “angrily” to define how your character is walking or speaking then you might not be setting up the scene or the character effectively. What other ways can you get anger across? Through dialogue? Thought? Reaction? Action? Or even in the build-up to the scene itself. Can the character slam things down instead of set things down? Can they stomp instead of walk? Can their word choice in dialogue convey how they’re feeling? Can their internal reflection reveal the emotion behind the anger?

Every time you rely on an adverb instead of letting the writing do the work, you’re essentially cheating the reader out of an interactive reading experience. Readers love to figure things out on their own. They love to put the pieces together and come to their own conclusions. Ooh. She’s doing a lot of stomping around and using some choice words. She must be angry. Or. Hmm. She’s acting pretty cagey, creeping around and saying things I know aren’t true. I wonder what she’s hiding. That makes for a much better reader experience than simply using the adverb, “sneakily” or “stealthily.”

Of course, using adverbs sparingly or stylistically can be very effective, as long as you’re not relying on them as a crutch to get out of doing some more creative work.

If you heard the word “action” and thought, “I’m writing a contemporary novel, I don’t need to worry about this,” think again! Over-choreographed action can occur in all types of stories. Essentially whenever you’re describing something active that’s happening in your story (like a fight scene, a battle, or even a character waking up and getting dressed), you want to make sure it doesn’t sound choreographed. In other words, it doesn’t sound like the reader is reading from a list of rehearsed steps. For example:

Mia stood up from her bed. She walked to the dresser and opened the top drawer. She pulled out her favorite pair of socks, a sweater, and some ripped jeans. Then, she hurried into the bathroom where she got dressed, brushed her teeth, and combed her hair.

Do you see how this is starting to sound like a Mia’s morning checklist? The key, in the revision, is to mix things up with different elements (thought, emotion, dialogue, reflection, stakes, description) and vary up the sentence structure. A possible rewrite for the scene above could read:


Mia’s feet felt wobbly beneath her as she stood up and walked to the dresser. What to wear? What to wear? Her unicorn socks were a good place to start. At least then, if the rest of the day was a disaster, she would have something to comfort her. She grabbed a sweater and some jeans. They were ripped but that would only add to the “I could care less what you think of me” vibe she was going for. In the bathroom, she got dressed, brushed her teeth, and ran a comb through her hair. If the knots that had formed overnight were any indication of how this day would go, she was doomed.

As you go through your own manuscript, take note of places that feel like a choreographed list of actions and see if you can’t shake things up a bit so it reads more like a dynamic scene and less like an Ikea manual for putting together a bookshelf.

Good luck with your current project! Happy writing and revising!

Take your first draft to final draft with a proven step-by-step process and comprehensive checklists, designed to make you feel organized, efficient, and in control.