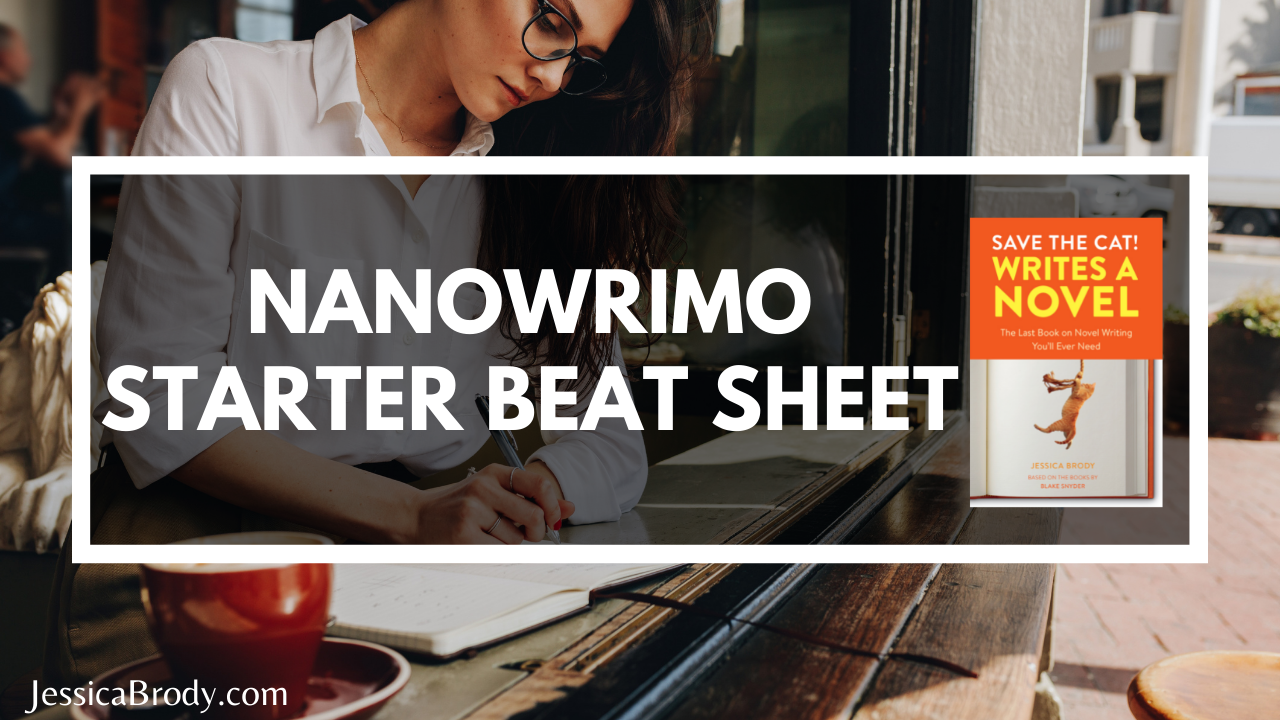 It’s officially NaNoWriMo (National Novel Writing Month) where writers across the globe challenge themselves to write a 50,000 word novel during the month of November.

To help you smash through that 50k word mark, I’m sharing with you my NaNoWriMo Starter Beat Sheet.

What’s a “starter beat sheet?” Well, think of it as a foundation for the full Save the Cat! beat sheet. It has 5 beats instead of 15 and I like to use it to jump-start my plot brainstorm. (It’s also a great tool for “pantsers” who want to dip their toe into the world of plotting, but don’t want to brainstorm a full plot outline.)

These 5 beats are not just random beats. They are very important beats. One might even argue that they’re the most crucial beats because they serve as a foundation for the rest of the beats. Like tent poles, they hold up the story. And because they are also the major turning points of the story, they serve to string the other beats together.

10% of the way through your novel, you absolutely, positively must have an inciting incident. No exceptions. Something BIG has to happen to your main character that turns their status quo world upside down. Breakups, deaths, and getting fired are always popular choices. Basically, anything that the character was NOT expecting and that is life-changing enough that your character can’t return to their old ways of doing things afterward.

20% into your novel your character must enter some kind of “new world” or try a “new way of doing things.” Hopefully, if you’ve made your Catalyst big enough, this won’t be hard to do. The old world has already been turned upside down, it should be too big of a stretch to push your character into doing something different.

Halfway through your novel, another change should occur. Sometimes this comes in the form of a second catalyst, sometimes it comes in the form of a giant break-through, realization, or plot “twist”. But this beat should contain either a “false victory” (the character gets something they think they want) or a “false defeat” (the character loses something they think they want, or fails to make progress toward getting it.) This victory or defeat is what sends the story in a new direction. Because either they got what they wanted and their big life problems still exist or they haven’t gotten what they want and their problems are bigger than ever. Either way, the character has to try something else, yet again.

It’s exactly what it sounds like. 75% of the way through the novel, your character should hit some kind of “rock bottom.” The lowest of the low. Something happens to them (Wow! Another Catalyst!) that brings them to their lowest point of the entire story. A point from which they don’t believe they’ll ever bounce back.

But bounce back they do! Huzzah! A solution to all problems! This moment (usually coming around 80% into the novel) is when your character finds a solution and makes some kind of proactive choice to act upon it. This will push the story into Act 3, which is all about the resolution, or in other words, the cleaning up of all the messes they got themselves into in Act 2.

So there you have it. The “Starter Beat Sheet.”

Give it a try when brainstorming your NaNoWriMo project this year. And don’t forget that the beats you brainstorm are not set in stone. They can always change. But this starter beat sheet will be like a rudder to your novel boat, pointing you in the right direction and always giving you something to write toward. Because trust me, when the middle of November hits and you’re halfway through that mighty oceanic passage that is NaNoWriMo, completely surrounded by water with no land in sight, you’re going to be very grateful you have something to write toward. Even if it ends up changing later down the road!