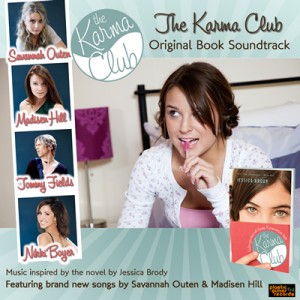 Music inspired by the novel by Jessica Brody!

For all the latest updates, visit PlasticGuitarRecords.com

Click here to learn about how the Karma Club Soundtrack came to be and how each song fits into the story.

Be sure to note the page number after each song title to see which part of the novel the song corresponds to. For the full multimedia experience, we recommend listening to each track while reading the indicated page in The Karma Club!

2. Kick Her to the Curb – Savannah Outen (pg. 72)
(Written by Matthew Clark, Produced by Ted Perlman)

8. Letter to the Past (Acoustic) – Word to the Wise (pg. 220)
(Written by Sarah Meeks-Clark and Ari Cruz, Produced by Matthew Clark)