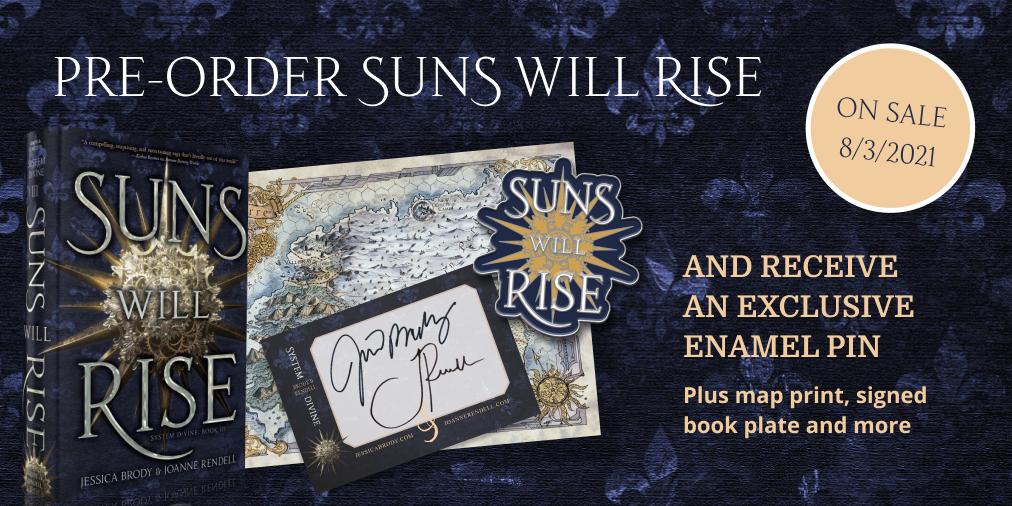 Pre-order SUNS WILL RISE before August 3, 2021 and upload your proof of purchase to get stellar pre-order goodies!

Step 1: Pre-order your copy of SUNS WILL RISE

Pre-order a HARDCOVER from a select indie bookstore and receive:

Ships to US & Canada

Pre-order ANY FORMAT from any retailer and receive:

* Shipped with your book purchase, while supplies last (limited quantities available)
Both options are open internationally.

Upload your proof of purchase and claim your gifts by filling out the form below.

SUNS WILL RISE is officially on sale! We're no longer accepting pre-order submissions at this time. Thank you for supporting the book!

Shipped with your book:
(If you purchased from a select indie retailer)

We’d love for you to help spread the word about this offer!

ALL hardcover pre-orders include a Deluxe Edition of the book featuring one of the three suns of the System Divine hidden under the jacket! Which one will you get? 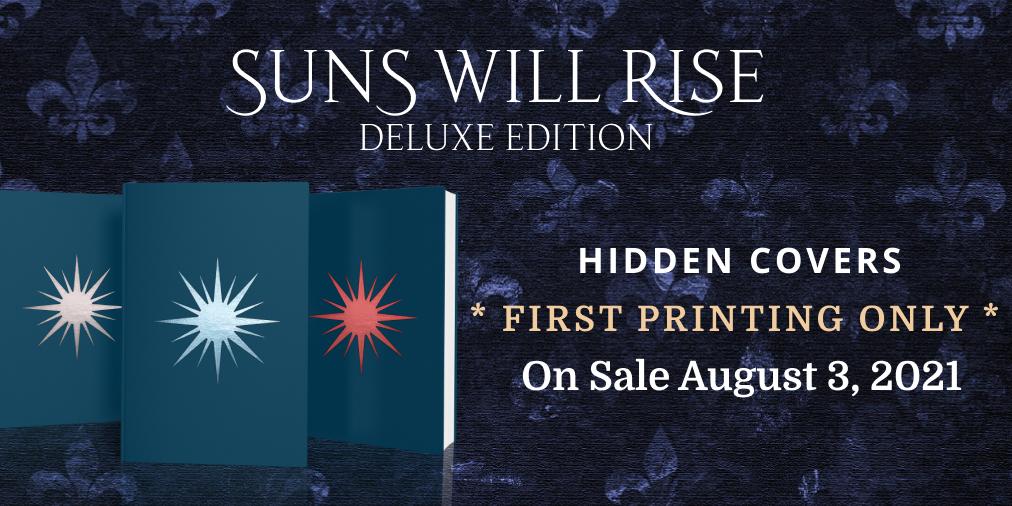 ABOUT THE BOOK: SUNS WILL RISE (System Divine #3) 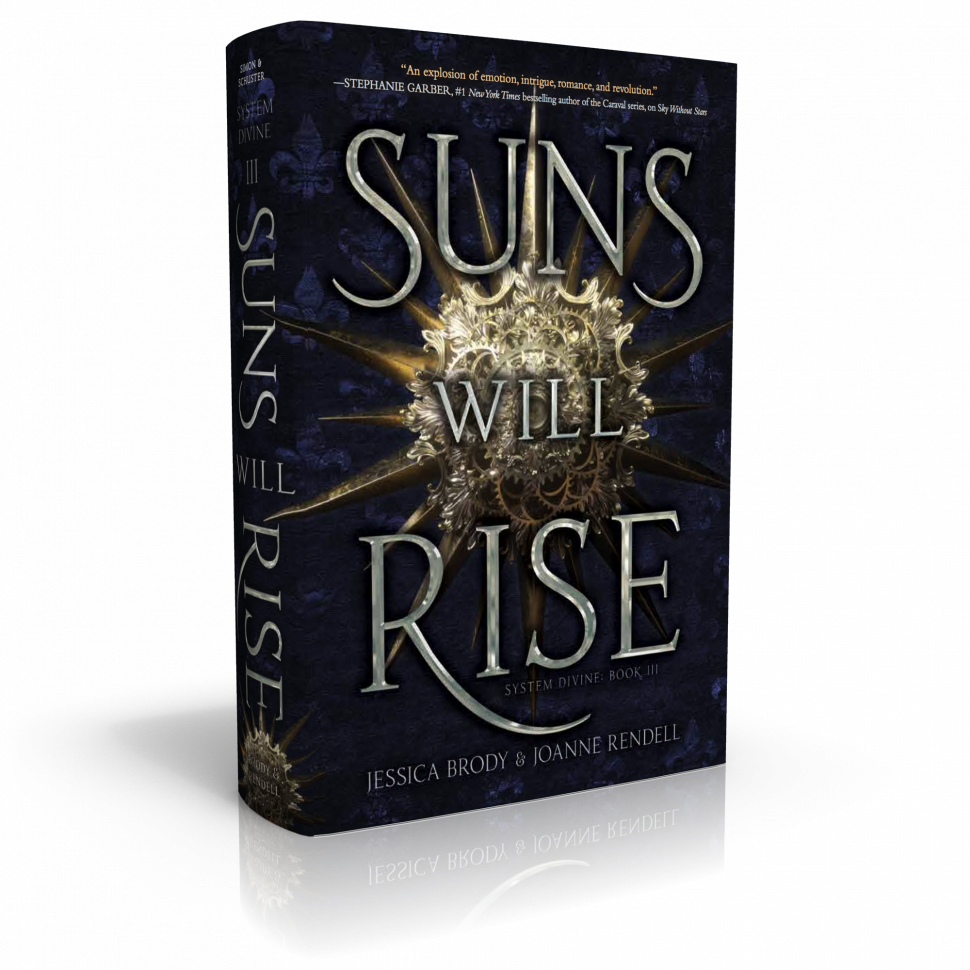 An heir. A renegade.
A convict. A cyborg.
A défecteur.

It’s been three months since the Patriarche was beheaded, leaving behind no heir. From the outside, Laterre seems to be flourishing. General Bonnefaçon has cleaned up the streets, fed the hungry, and restored peace while the next leader is decided upon. But dangerous rifts threaten to shatter the planet from within.

The Red Scar is killing anyone with a legitimate claim to the Regime, while the Vangarde and their freed leader are preparing to overthrow it.

Then, it’s revealed that the Patriarche had a child in secret. A missing heir…

Alouette is the general’s prisoner, interrogated on the whereabouts of his renegade grandson. Marcellus is desperately searching for her, knowing she’s the key to the Vangarde’s plan, but unaware that he’s being hunted by a determined new cyborg. Meanwhile Chatine grows restless, living with a rebel group she doesn’t fit into. Until an old friend solicits her help to save his Défecteur community from a mysterious, new threat. A threat that will tie them all together.

When the general makes an explosive play for power, allegiances will shift, rebels will become leaders, barricades will rise, and the tinderbox of Laterre will finally ignite, launching a revolution five hundred years in the making.

IS THIS OFFER OPEN INTERNATIONALLY?

Yes! Anyone is eligible for either pre-order option. However, if you would like to receive the enamel pin, map print, and signed bookplate, you must pre-order a hardcover copy from one of the select indie bookstores that ships internationally. See the full list of stores here.

NOTE: International shipping charges will apply and shipping speeds may vary based on store and country.

HOW DO I CLAIM MY GIFT?

Use the form above to fill out your information and upload a copy, scan, screenshot, or picture of your receipt (proof of purchase) and that’s it!

Your System Divine Series Beat sheet will arrive by email (as a digital download) by August 9, 2021.

If you pre-ordered a HARDCOVER from one of our select indie bookstores, your additional gifts will be shipped with your book.

HOW WILL I KNOW IF MY PRE-ORDER WAS SUCCESSFUL?

You will receive an email with a confirmation of your submission. We will get in touch if there are any problems. If you didn’t get an email, please check your spam folder first, then contact us using our website contact form.

WHEN WILL I RECEIVE MY GIFT?

Your System Divine Series Beat sheet will arrive by email (as a digital download) by August 9, 2021. It will be sent to the email address you provided in the form above.

If you pre-ordered a HARDCOVER from one of our select indie bookstores, your physical gifts will be shipped with your book. (NOTE: Shipping times will vary by state and country.)

If you haven’t received your preordered book or physical gifts, please contact the store that you purchased from.

IF I ALSO PRE-ORDER A COPY FOR A FRIEND WILL WE BOTH GET THE GIFTS?

Yes! Thanks for sharing the book! Every pre-ordered copy of the book is eligible for the gifts. However, we ask that you fill out the form above for each copy you purchase and provide receipts for each purchase. (If you purchased multiple books on one receipt, you can upload the same receipt with each submission.)

CAN I ORDER THE BOOK IN EBOOK OR AUDIOBOOK?

Yes! However, please note that eBook and Audiobook formats are only eligible for the System Divine Beat Sheet. To receive the enamel pin, map print, and signed bookplate, you must order a HARDCOVER copy from one of our select indie bookstores.

DO I HAVE TO ORDER THE BOOK FROM A SPECIFIC RETAILER?

No, however, please note that only hardcover copies purchased from one of our select indie bookstores will receive the enamel pin, map print, and signed bookplate.

Pre-orders from any other retailer (in any any format) will only receive the System Divine Series Beat Sheet.